The smallmouth bass is known as one of the hardest fighting of the black bass family. Their airborne acrobatics after being hooked provide anglers thrills that can be unmatched in freshwater fishing. The sight of a tiger striped bronzeback clearing the water by three feet or more has proven to be more addictive to some than narcotics. 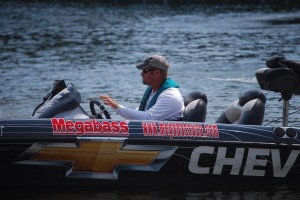 For FLW Tour pro Luke Clausen, smallmouth bass were his education into bass fishing. Clausen, from Spokane, Wash., spent the formative years of his fishing career on the famed waters of the Columbia River; which flows south through the state of Washington before turning west and forming much of the Washington / Oregon border.

While the Columbia celebrates much of its heritage around salmon, it is a smallmouth bass angler’s paradise. Anglers routinely turn in 16 to 17 pound limits of brown bass, and reports five to six-pound smallmouth are common during certain times of the year.

The Columbia River can be a brutal environment. The river is replete with lava rocks that form pinnacles and rockpiles that have resulted in many propeller and lower unit repair bills.

“I started fishing the Columbia River with my dad when I was 13 or 14,” said Clausen. “It really has been my home fishery for the past 20 years, and it has taught me a lot about catching smallmouth.”

Avoid Conventional Thinking
Common school of thought about fishing is that anytime anglers should target the lee; or downstream, portion of obstructions to have the best chance at catching fish. Clausen said that his experience on the Columbia River has taught him something different.

“I know that most people think we should look for obstructions and fish behind them,” said Clausen. “However, I’ve learned that doing the opposite is actually more effective. The fish that are on the upstream portion of an island or a jetty are the aggressive, hunting fish.”

Clausen revealed that he is a proponent of the use of underwater cameras that became popular several years ago. It was during the use of those cameras that he discovered that the upstream face of an obstruction presented the best habitat and feeding opportunities for smallmouth. “The current washes more of the debris and silt away at the front of an island or rockpile,” he said. “So, what I found there were depressions at the front of the island, or the clean, rocky bottom that smallmouth love so much.” 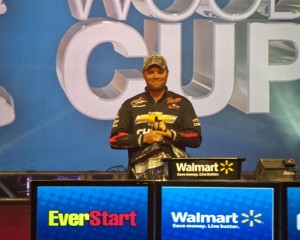 While many people would believe that the current at the face of an island in a river would be too strong: Clausen said that bottom drag solves that problem. “The water flow at the river bottom is slower than the main current because of bottom drag,” he said. “Smallmouth can sit comfortably in that two to three foot void of current and dart up and eat things that wash by in the current; they’ve really got it dialed in.”

Angles
With that in mind, Clausen said that the best way to fish for bass at the front of an obstruction is to put the nose of the boat into the current and play the angles. “I position my Ranger at a 45-degree angle back and to the side of the island or the wing dam that I’m fishing,” he said. “I present my lures upstream of the point, and bring the lure with the current into the strike zone.”

There are times when fast moving lures will produce, but Clausen is a big believer in lures that hug the bottom to produce heavier strikes.

River Smallie Rigs
His first choice is a tube; “I like a plain old green pumpkin tube on a jig head,” he said. “It’s really hard to beat a tube on a tube head on a river.” He is also a huge fan of the Carolina Rig, and when smallmouth are higher up off the bottom, a drop shot is also on his list.

He prefers darker colors to imitate crustaceans and crayfish that these river smallmouth feed on. So, his primary choices in any lure category are natural and somewhat dark “Green pumpkin is a great choice in semi stained to clear water,” he said. “If the water is really clear though, I like watermelons and sometimes pumkin colors too.”

He tends to use ZMan Finesse Wormz on his Carolina Rig, and for dropshotting the first choice is usually a 3.75” ZMan Finesse Shadz lure; he said any old generic 3.5” to 4” tube will do the trick. He starts with a 3/8-ounce tube head unless the current or wind is too strong, then he will go up to a 1/2-ounce if he needs to. Carolina Rigs receive 1/2-ounce or higher weights and he starts at 3/16-ounce for the dropshot. 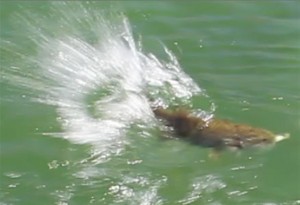 He uses baitcasting gear on the Carolina Rig and the Tube, but turns to spinning tackle for the Dropshot Rig.

Feel
Clausen emphasizes feeling the bottom when fishing in this manner. For that reason, he uses sensitive lines, and even changes out the tip guide on his rods. “I use 10-pound-test TUF-Line braid as my main line on everything but the Carolina Rig,” he said. “I then tie a leader of Gamma Edge Fluorocarbon onto the braid. It gives me great feel, but also helps me set the hook better in current.”

He also enhances the sensitivity of his rods by changing out the standard tips to a REC Recoil tip top. “The titanium rings on the guides really add sensitivity to my rods,” he said. “Plus, I don’t have to worry about busting a ring on boat rides in rough water on a river system.”

River Lessons
Many people might consider growing up fishing a river like the Columbia as a disadvantage when moving to other types of lakes. However, Clausen said that his years on the Columbia have helped him. “I learned how smallmouth live, and how fish respond to current in general,” he said. “My experiences on that river have helped me on TVA Lakes, the California Delta and many other places.”