Everyone has a dream for their life. When we start out as youngsters we may want to be a pro football player, baseball player, a firefighter, law enforcement officer, astronaut, actor, singer or even President of the United States. As we age and reality sets in, most of us find ourselves choosing to toil at things we can tolerate to allow us to look forward to fleeting moments of joy at our favorite pastimes. Usually, that lifestyle starts in our twenties and takes us through retirement years. 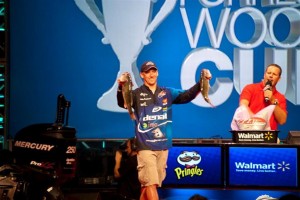 Others of us get the chance to live our dreams from the beginning. We make it through to the big leagues, become child actors revered for our talent and charisma, or accomplish the goal of reaching the Oval Office. The population of that city is much smaller, and has a much more exclusive address.

But, there is a third group that somehow finds their passion later in life. After several years of doing one thing for a profession, they find a passion for a new endeavor that motivates them enough to make attempts to follow their dreams. These people often begin working in one profession, then find a way to involve themselves in the arena that they have come to love. It sometimes takes longer than they think it will to fully get clear of entanglements to fully immerse themselves in that dream job, but eventually, they find a way.

Mike Helton is one of those guys.

Who is Mike Helton?
To be fair, Helton is an everyman. That’s not to say he is plain, or unimpressive, he is just the kind of person that leaves you feeling like you’ve known him. Helton, from Jeffersonville, Indiana, is a 36-year-old husband and father of two boys who works at a Duke Energy coal fire power plant as an operator.

But, to stop there would be to leave some of his most interesting professional attributes behind. Helton is also a bass angler who stumbled his way into tournaments in 2004, and eventually found his way into becoming a part owner of Denali Rods; and up and coming rod manufacturer from Mountain Home, Ark. which he serves as Sales Manager with his partner Scott Estes.

Like many kids, Helton experienced fishing as a youngster, but primarily as a recreation activity. “My dad and grandfather fished and hunted, so I’ve been around the outdoors my whole live,” said Helton. “Other than my dad trying his hand later in tournaments, none of my family fish competitively, so I kind of found my way into it myself.”

Crash Course in Tournament Fishing
Helton entered his first tournament in 2004 as a non-boater, and finished 16th. The result was that he was immediately gut-hooked by the sport. “I suppose I may have not enjoyed it so much if I hadn’t done well,” he said. “But, the experience was exciting, and I loved the competitive aspects of it, so I wanted more.” 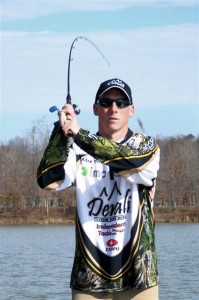 That led him to enter larger tournaments. He started fishing FLW WalMart BFL events as a Co-Angler until 2008, then he wanted to learn from the big boys, so he began entering on the Co-Angler side of the FLW Tour. His high water mark as a Co-Angler thus far has been his 2011 performance, where he finished fourth in the point standings, and went to the Forrest Wood Cup as a Co-Angler and finished seventh.

He said he plans to move to the front of the boat, but prefers to take it slowly. “I was offered a slot in the FLW Tour Majors field because I finished in the top five as a Co-Angler,” Helton said. “But, I don’t feel like I’m ready for that yet, so I’ll stay as a Co, then fish some local team events and some BFL’s as a boater to keep learning.”

Building a Brand
A little more than a year ago, Helton joined Estes as the Sales Manager for Denali Rods. In working with Estes to build the brand, the pair discovered that they worked well together and that they enjoyed it while doing it. So, when the opportunity for Helton to invest in the company and become a partial owner, he jumped at the chance.

“I had always wanted to own my own company, and when I got into fishing, I wanted to own one in this industry,” he said. “I was really proud to be a part of Denali, and when the chance to become a minority owner came up, I was really excited about it.”

His job at the power plant includes a schedule that allows him the time to work on the business and his fishing, so he set out to perform at both endeavors. He said that the people of the industry and the company goals are what drive him. “I really enjoy meeting new people; especially those I have fishing in common with,” he said. “That, and having pride in something that Scott and I work so hard on together really keeps me going.”

The things he has learned along the way help him with his personal branding as well. Having one of his sponsors travel with him doesn’t hurt either. Dustin DeVoss from Angler Skins.com has become a partner, friend and mentor all at the same time. “He’s been a great friend all along,” said Helton. “But he helps me in ways he doesn’t know that are invaluable to me.”

The Juggle and Future Plans
Helton said that the only thing that allows him to work the hectic schedule he does is the support at home. “My wife Kristy is behind me every step of the way,” Helton said. “She and our sons (Jake 6 and Zach 3) love fishing and being a part of everything we do. They are at as many tournaments as they can be fishing from the bank until weigh-in, and that support is the only way I could do this.” 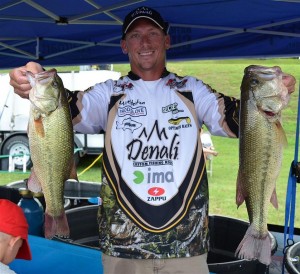 As far as the company and fishing career goes, Helton aspires to become a professional angler, and he wants to help Denali become a well known and respected brand. “We build a great product, and we’ve got a great team of anglers working with us,” said Helton. “We want people to know that we build a great product and that there are great industry people behind it. That’s our goal really.

Advice to Others
As far as encouraging others to live their dreams, Helton said to maintain focus and lean on those close to you. “Anything is possible, you just have to work at it,” he concluded. “It also helps to have family support, when they believe in you; a lot of things are possible.”