12/22/2011 – Every year, bass fishing fans are treated to a new group of rookie pros on the tour level. Some of them make it, and some don’t. While the list of pros who stay on tour a year or less is long, there are plenty of stories of those who make it in the sport.

Chris Zaldain hopes to be one of those guys. 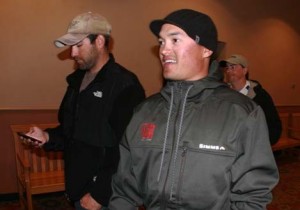 The 27-year-old pro from San Jose, Calif. has been on a crash course with the Elite Series for several years. Starting from the moment he began fishing from the bank, to a couple years as a Co-Angler on the Everstart Series, to the four years on the FLW Series National Guard Western Division; Zaldain has been in drive and the throttle has been on the floor.

A quick recap, as a pro in the FLW Series Western Division, Zaldain racked up an impressive $149,000, but more importantly, he qualified for the Forrest Wood Cup all four years. He also claimed five top 10 finishes on the Series en-route to making himself a household name in the West.

Then, when FLW announced that the Everstart Series would be the only tour they brought to the West in 2011, he made the decision to focus on the B.A.S.S. Central Opens. With little experience in other regions of the country, one would assume that Zaldain fell flat on his face and come running back home. Not even close. Instead, he proved that he could not only survive, but he could thrive.

In the three event Central Open trail, Zaldain placed seventh at Lake Lewisville in Texas, second at the Arkansas River in Muskogee, Okla. then rounded it out with a 19th place at Table Rock Lake in Branson, Mo. On the nature of those finishes, Zaldain became the Central Open points champion and achieved his primary objective

Elite Series Bound
“I started the year by deciding I was going to do everything in my power to make the top five in the points and qualify for the Elite Series,” said Zaldain. “I looked at the lakes on the schedule and figured out that the probably would fit my style of fishing, so I went after it.”

That he did, and now, he has earned the right to put up his $43,000 in entry fees and compete against the other 99 anglers on what is widely regarded as the most competitive league in the world – the Bassmaster Elite Series. “I really wanted to get there,” he said. “I saw Ike and Skeet and KVD on ESPN and thought that level of competition would be the most fun, and most challenging, so that’s what I wanted to do.”

Research and Practice Junkie
Zaldain revealed that his big key to doing well on lakes he had never fished was to research as much as he could. By scouring the Internet and pouring over lake maps, Zaldain was able to get a picture in his mind of how he would go about practicing for each event. 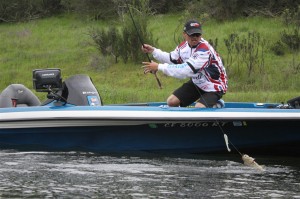 Even that was not taken lightly; he had a plan for everything. “FLW gave us four full days of practice for Series events,” he said. “So, with that as my guide, I set a plan to practice knowing I would only have two and a half days once I got to the Elite Series.”

He used the first two days to drive around the lake – usually by truck mainly – to find suitable fishing areas. Then, in training himself to work under similar time constraints to the Elite Series schedule, he fished as hard as he could for two and a half days for each Central Open.

He feels that his approach will help him in 2012. “I learned how to make the most of every minute and cover water quickly,” he said. “The reason is to gather enough info to make decisions, and I had to work quickly to do so.”

Confident, but Aware
Being from the West, Zaldain has a large repertoire of tournament tactics he can rely on to catch fish. “That’s the one thing fishing out West has given me is versatility,” he said. “I can catch them shallow or deep, in dirty water or clear water, and I know I’ll face all of those conditions out there.”

The one thing that he knows is a drawback to his Western upbringing is that the West and the East have a different focus. “It’s all about finding the right spot at home,” he said. Get on the right spot and you can look like a hero, but its more pattern based on those bodies of water, so I’ve had to make an adjustment.”

The other consideration is how much bigger the bodies of water are. “Everyone has always told me how much bigger the lakes are back east, and they’re right,” he said. “They are absolutely enormous, so I’m training myself to research effectively, and pick areas of the lake to practice, instead of trying to cover the whole thing.”

He also knows that the prevailing thought is that it takes as many as five years to get comfortable out there. He just hopes his work ethic and effort will shorten that window.

Goals
Zaldain said that he has looked at the field, and has decided that he has three objectives for his first season. “I want to be the Rookie of the Year, but with our group of rookies, it won’t be easy,” he said. “I really want to make the Classic in my rookie year, and I’m focused on cashing paychecks in at least five of the eight events. If I can do all of that, I’ll feel like I did a great job out there.” 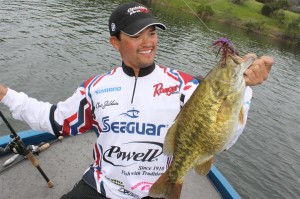 Preparations
Zaldain has been spending as much time preparing for the season. He has taken a leave of absence from his job as a maintenance technician at a Semiconductor facility near his home, and he has been courting sponsors. “I was able to find a home with Skeeter and Yamaha for the year,” he said. Ish Monroe and Jared Linter helped me with their respective companies, and I’m proud to be running the rig I am.”

His line sponsor Seaguar stepped up for him as well, and he is awaiting final word from a few other companies. “I am finding things to be a little tougher on that end than I thought,” he said. I figured that getting my “Elite Card” would have made it easier, but Ish and Jared have helped a bunch, and I’ve got a little better understanding and I’m hard at trying to make things work out.

“I can’t wait; I’m really excited to start my new job in March.”