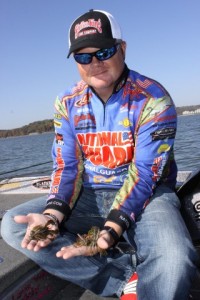 FLW Tour pro Mark Rose of West Memphis, Ark. has earned a reputation as the most dominant angler on tour when it comes to offshore structure fishing. Since 2007, Rose has won four tour level events, an Everstart Series Championship, a BFL event and the 2008 PAA Corporate Cup – all by fishing offshore.

To be sure, Rose has invested many dozens of hours patrolling the waters of the Tennessee River with his Lowrance HDS fishing systems locating prime offshore structure locations. While the where is certainly a key to unlocking bass location, the hows of getting them to bite is another part of the equation.

Rose has adopted an approach that involves tossing deep diving crankbaits, flutter spoons, big worms and of course, football jigs. With all of those categories, Rose has developed an approach that relies on precision presentation and positioning. He has refined his tactics with all of them to a precise science, but the one that gives him a level of creativity is the football jig.

“I use a variety of trailers depending on what I am doing with the lure, where I’m fishing it, and what I am fishing for,” he said. “But, even though they give me a little bit of creativity on my jigs, I still have it down to a systematic approach there as well.” 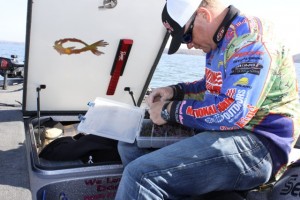 Jig and Jig Gear Makeup
To start with the main component of the lure, Rose tends to throw one size, and one color jig for 90-percent of his football jig fishing. For everyday use, he uses a 3/4-ounce Strike King Tour Grade Football Jig. If he is fishing for spotted bass or smallmouth, then he downsizes to the 1/2-ounce version of that jig, and trims the skirt to mimic a spider jig with a short front part of the skirt around the head. If he is fishing for larger than average fish, he uses a specific trailer and upgrades to the 3/4-ounce Tour Grade Heavy Hook Football Jig. He uses the Green Pumpkin Craw color nearly all the time.

As for his equipment, he opts for a 7’3″ heavy action Kistler ZBone LE rod that he matches with a 7.1:1 reel which he spools with 15-pound-test Seaguar Invizx fluorocarbon the bulk of the time. “I want my rod actions to feel the same on each cast,” he said. “I use the heavier line because I want my hookset to remain the same no matter where I am fishing.”

He said he only adjusts his line size up or down if he is fishing the lighter jig for smallmouth and spotted bass, or he is fishing the heavy hook jig for bigger bass on specific bodies of water like Falcon or Amistad.

Trailers for Depth
With the exception of his upsizing and downsizing for the specific size of fish he is targeting, Rose uses the depth of the water as his decision for which of his two primary trailers for his every day offshore football jig fishing.

“I really have two primary trailers,” he said. “It used to be just one, but now we have a second model that gives me an advantage in deeper water.” Those two trailers are the Rage Craw and the new Rage Menace Twin Tail Grub.

He prefers the Rage Craw in water to 22 feet, but deeper than that, he has started turning to the Menace. “I really love the action of the Rage Craw, but because it has such a wide stance in the claws, it has a lot of bulk and feels heavy in the water,” he said. “It also slows the fall of the jig down a bunch, which I don’t want in deep water.” 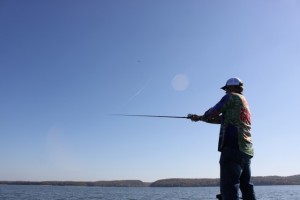 He likes the Menace because it gives a similar action, but speeds the fall in deeper water. “Most people don’t know this, but a slimmer trailer actually helps you recognize bites in deep water,” he said. “The bulkier trailer feels heavier on the jig, and can make you think you’re getting a pressure bite when you’re not.”

Trailers for Size
Rose has two other considerations for jig trailers, and they revolve around the size of the bass. “I mentioned the two other jigs I throw for smaller and larger fish,” he said. “I also adjust the trailers to match those jigs.”

For the smaller jigs, he downsizes his trailer to a Baby Rage Craw, and for the larger fish, he actually prefers to match his jig with a full 6-inch Rage Game Hawg trailer. “The Baby Rage Craw matches the size of the jig, and the smaller mouths of smallmouth and spots,” he said. “But for larger fish; those seven to 10 pounders, I like the elongated, bigger profile of the full Game Hog. It has swimming tails to make their presence known more as well.”

Retrieves for Trailers
For the Rage Craws, Rose prefers a standard hop or twitch type retrieve. He said that he pulls the jig slowly and alternately hops them to mimic a crawdad scooting along the bottom. “This is the retrieve I use most of the time,” he said. “In most instances, bass will respond to a standard drag, hop shake type retrieve.”

If he is fishing the Menace Grub in deeper water when the fish are still not extremely active, then he employs the same retrieve. However, when bass are aggressive, but won’t chase a crankbait, he uses a “stroking” type retrieve. This involves snapping the lure high off of the bottom and allowing it o fall back down on a semi slack line. 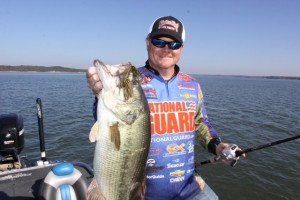 “Jigs are great for getting bites from better quality bass, and I’ve really gotten comfortable with a system that allows me to appeal to bass everywhere,” he said. “They’ve been a major part of my wins offshore, and they’ll help anglers everywhere do well too.”