Transitions are Everything with Jared Lintner 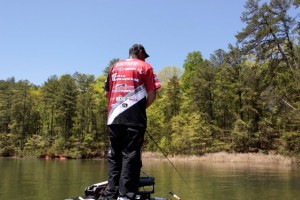 Jared Lintner on the Prowl – photo by Dan O’Sullivan

This postspawn to summer transition can be one of the most interesting fishing times of the year.  Bass can be anywhere, and by anywhere, and angler could focus on the shallows for six or seven bites, deepwater structure to weed through numbers, or anywhere in between.

Bass can be in the fry guarding stage, they can be feeding on bluegill at the tail end of the bluegill spawn, or they could be out on ledges chasing giant shad.

If you’re Arroyo Grande, Calif. based Elite Series pro Jared Lintner, you may do them all.  “I try to set myself up to be ready to do just about anything this time of the year,” he said.  “I will be ready to catch them from the surface, to forty feet, I’ll let the fish tell me how I need to catch them, and it can change throughout the day.”

What Lintner does is prepare himself with several different rods that can be quickly accessed should he need to make adjustments.  They may not all be on the deck at the start of the day, but he is mere seconds away from reaching under the rod locker lids of his Skeeter boat to access them quickly.

The Setups
Lintner operates on a top – middle – bottom philosophy during this transitional time of the year.  His process can find him fishing in extremely shallow water, or offshore, and he relies on having his arsenal at the ready, no matter where he is.

I have a Jackall Bonnie topwater walking bait, a Jackall Aska 60 crankbait, as well as a Muscle Deep 15, then he wraps it up with an Eco Pro Tungsten Jared Lintner Football Jig.  With this series of baits, he can cover the surface to the bottom and do it quickly.

For the topwater bait, he prefers a GLoomis GLX 845 CBR matched with a Shimano Chronarch 200E6 with a 6.5:1 retrieve and 25-pound-test Sunline Super Natural monofilament.  He said that he used to use the braded lines for topwater, but found himself losing fish, and after experimenting with the thin diameter Super Natural mono; his hook to land ratios are higher.

For both crankbaits, he spools the same Shimano Chornarch with 12-pound-test Sunline Reaction FC for the Muscle Deep 15, and 20-pound-test of the same line for the Aska 60.  He uses 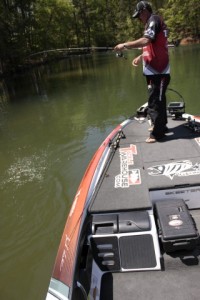 He rigs his 3/4-ounce signature Eco Pro Tungsten Football Jig with a Big Bite Swimming Craw on a GLoomis 895 GLX Jig and Worm Rod, then matches it with a 7.0:1 retrieve Shimano Core reel spooled with 20-pound-test Sunline Shooter Fluorocarbon.

“These rods will let me fish all day, on just about anywhere in the country as my mainstays,” he said.  “I might have a few finesse setups, like a Jackall Flickshake, in the locker, but it’s really rare that I have to get into them.”

Start on Top – Move Quickly
Lintner said that he regularly starts with a topwater bait this time of the year for two reasons.  One, he can use it to quickly cover a lot of water and locate fish.  Two, because the type of topwater he chooses tends to draw bigger strikes as well.  “A walking bait like the Bonnie or Bowstick is capable of really long casts and making a lot of commotion.  The larger profile helps make bigger fish strike, too.”

He likes to give the topwater a fair shake in the morning, for at least an hour, until the sun gets up higher in the sky.  That is unless he is fishing a lake with a healthy amount of grass, then he will keep it at the ready and give it a few casts each time he goes to a new spot.

After he has all but retired the topwater for the day, he turns to the crankbait.  For shallow cover, he relies on the Aska  60, and for water up to 15 feet deep, he turns to the Muscle Deep 15.  “My approach is the same with each bait,” he said.  “I want to power the bait through cover and around an over rockpiles to try and trigger a strike from bass near the cover.”

He then turns to the jig and uses it as a mop up bait to tray an engage bass that have become wary of the crankbait.

“You have to be prepared to move quickly and often,” he said.  “In a practice day, it’s not unusual for me to cover 25 spots or more looking for the fish to give me some kind of information to build on, and during a tournament, if I’ve fished one of my spots for 45 minutes without a bite, I move on.  You can’t sit and wait for them this time of the year, you have to get going.” 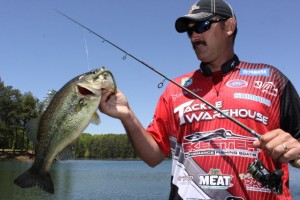 Jared Lintner with a Nice Largemouth – photo by Dan O’Sullivan

Simple Locations
He said that selecting a starting spot is fairly simple this time of the year.  “I really don’t need to get too complicated selecting fishing areas right now,” he said.  “I just need to look at the outer edge of spawning bays, and the points that are on the outside of them.  For people who fish the same lakes all the time, look at where you were catching them two weeks to a month ago, and move just outside of that; you should find them.”

Final Tips
Lintner said he tries to pay attention for the little clues that each fish will provide.  “One or two fish will really tell me so much about what they are doing,” he said.  “I really want to get bites, but I also try to remember that eliminating unproductive areas is also a positive thing.  Everything I eliminate helps make me more efficient.”

He also said he learned something from his Elite Series counterparts, Mike McClelland and Jeff Kriet, both structure fishing gurus.  “They’ve taught me that if I can find one productive spot a day when I am searching for offshore structure; I’ve done a lot,” he said.  “I just rig up my rods, move quickly and try to locate one or two good areas that make  difference; it’s a great way to fish this transitional time of the year.