What the…?! Water Clarity? – John Murray Answers the Questions

I’m a bass fisherman, I’ve been doing it for a long time, mostly in the West on my home waters of Folsom Lake, Oroville, Shasta, Berryessa, The California delta and Clear Lake. But, in August, my family moved to Rainbow City, Alabama, and I quickly realized that I was going to have to gear up differently for the waters here.

Don’t get me wrong, I have plenty of tackle. However, tackle made largely for the “West Side!,” as Byron Velvick likes to say, is built for a different kind of water than in the Southeast – or so I’d heard. 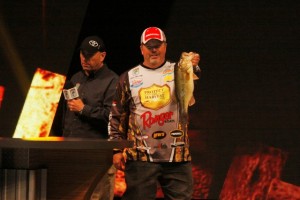 I was on Pickwick Lake in November for the T-H Marine Media Event and I was with FLW Tour Pro Wesley Strader filming videos of him throwing a small Sexy Shad colored flat sided handmade crankbait along the rip rap walls and the canal leading up to the lock. Part way into the filming, I realized that I couldn’t see the bait until it got near the boat because the water had 18-inches of visibility. It piqued my curiosity as to why he had chosen a white based color in such dirty water.

So, I asked him a question. “Why did you choose that color to throw in this water clarity?” His response stumped me. “I always throw a natural shad color in water that is this clear,” said Strader.”

HHRRRMMPPPHHH!? Brain Cramp in the mind of a writer. “Clear water?” I thought to myself but didn’t have the nerve to ask because if you know Strader, I would have gotten a smart-aleck response back, and then I would have had to push him in the water.

I pondered what I’d seen and heard that day, and looked at the Coosa River water rolling through Lake Neely Henry as we drove around town running errands; and I realized that there are different levels of water clarity depending on where you live.

I decided I needed some help so that I could order appropriate products as well as make decisions on the water. I sought the help of Phoenix, Ariz. pro John Murray. I could have asked any one of number of the pros and they all would have tremendous answers for me. Murray however, has a resume that any angler would envy.

In his career, he has won 31 boats in competition in the West, and has won a tournament on every major tournament body of water in the West. Then, after graduating to the Bassmaster Tour, he won events on the James River and Toledo Bend, and he’s had high finishes just about anywhere else.

In other words, he’s seen it all, and I wanted to know how to look at water from someone who knows both areas in which I’ve lived and fished.

Murray said that his general rule for fishing is that the clearer the water, the wider the strike zone, the dirtier, the narrower he focuses. “In clear water, I may only have to make three or four presentations to a piece of cover, but hit every little piece of it in dirty water,” he said. “I also tend to fish faster in clear water, and farther away from the cover. My rule of thumb is that I double the distance I’m fishing from cover if the water is clear; it helps keep me from spooking the fish.”

He also said reduced water clarity helps him narrow his colors down. “In truly clear water, like I grew up fishing in the West, I would almost have to count the flakes in a worm and make sure they were the right size in order to get bites sometimes,” he said. “On tour, I have a dark color, a green pumpkin color and something bright; and that’s pretty much it.”

Defining Clarity
He groups most Western impoundments with a lot of the Ozark Lakes for their “versions” of overall clarity. “In those lakes, I tend to see clear water as anything with five feet of visibility or greater,” he said. “I’ve fished Lake Mead and many other lakes out West when I could see 20 feet deep or more, and the Ozark lakes can be similar.”

Colors by Lure Type
In asking about the most common lure types, Murray said; like most pros, he chooses his color by water color first. He carries sets of baits that give him the color options he needs for a variety of conditions.

Wrapping Up
While the colors themselves will have a bit of personal subjectivity, anglers can use Murray’s experience and his own measurement scale in order to pick out lures that will work for themselves. My conversation with him helped me better clarify the kinds of colors and lures I need to add to my arsenal in order to give myself the best chance for catching bass on my new home waterways.

I’ve got plenty of the translucent colors for clear water from 25 years fishing in the West, but I need to fill out my stock of dark and bright colors in order to be ready. Now, if I can just find where my wife hid my credit card, I’ve got Monster Fishing Tackle open on my browser.