From Sabine to Falcon Opposites Attract – A Falcon Lake Preview 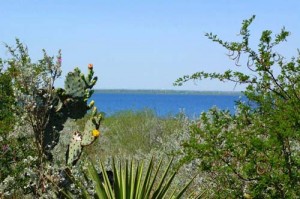 A Pristine View of Falcon Lake

The first event of the 2013 Bassmaster Elite Series season has just wrapped up.  As we pen this, Todd Faircloth is perhaps just now on his way to Zapata, Tex. with his new blue trophy in tow, hoping to make it to the giant bass bonanza on the border without missing too much practice time.

The rest of the field may be just happy to have survived the first event.

Without doing much digging, it probably wouldn’t be too much of a stretch to say that the Sabine River was perhaps the toughest Elite Series event in the seven previous seasons of the Bassmaster Elite Series.  The one event that would likely rival the difficulties of the Sabine River event this past week  was the River Rumble in Fort Madison, Iowa in 2009.  In fact the events, statistically were similar.

All told at the Sabine River, there were 262 angler days competed on the water , in that, only 56 limits were weighed-in, and the total weight for all four days of the event was 1,358 pounds, 8 ounces.  Things should be quite different at Falcon Lake, in fact, the limits total will be broken on the first day, and the last time the elite Series went to Zapata, the eclipsed the 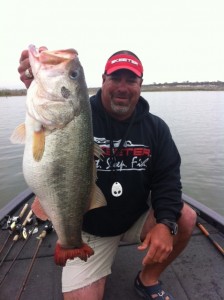 Tony Coatney with a Falcon Lake 10-8

total weight of the Sabine River weight by a factor of four.

It certainly won’t be the same as it was in 2008, but Falcon is still going to present a welcome fishing experience for the field after leaving the Sabine River.  The angler reviews on the warmth of the community and the size of the  crowds at the Orange, Tex. weigh-in sites were glowing, however, they are likely looking forward to increased catch rates at Falcon.

We wanted to know what the anglers could expect to encounter as practice begins today on Falcon.  So, we contacted Tony Coatney of www.grandfishingwithtonycoatney.com; a guide who operates part of the year at Grand Lake in Oklahoma, and the rest of the year in Zapata.

Coatney has been a professional guide, television host and tournament angler for more than 20 years, and when Mexican cartels forced him to stop operating across the border on El Chuchillo, he settled on Falcon.  He leaves his operations at Shangri-la on Grand Lake in November, then returns in Mid March after guiding on Falcon for the winter months.  his last trip at Falcon before returning home was Friday march 8.

He was kind enough to tell us what the conditions are like, and what type of bites the anglers can expect to be once they hit the water.

Falcon Lake Conditions
Coatney reports that Falcon Lake is still down approximately 25 feet as the drought conditions seem to have kept the lake lower than normal throughout the season.  Although the area received rains that started increasing the lake level, it still did not reach the level to put shoreline cover in the water.

“There are not many trees in the water right now,” said Coatney.  “So, the fish have stayed out deeper than they have in the past.”  He also said that the lake has basically been about a month behind its usual schedule this year, and that the first wave of spawners never had to move to typical post spawn areas.  “That first wave, which usually spawns in December, spawned in January,” he said.  “After they spawned, the lake level rose, and they never had to move out to deeper water, so they just stayed where they were.” 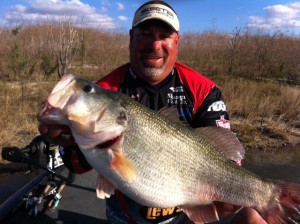 Tony Coatney with a Falcon Lake 10-9

As a result, he said that he expects the anglers who do well in the event this week will be fishing somewhere around the 25-foot level.  “Those Elite guys are the best in the business at figuring those kinds of offshore bites out,” he said.  “I have a feeling they’ll do pretty well.”

Along with those factors, he said that the authorities are not pulling as much water, so the baitfish has stayed deep.  “Your fishfinder will turn black at 40 to 50 feet,” he said.  “That’s the shad and tilapia, and when they move up in the water a little bit on an area, watch out.”

He said that the upper ends of the lake are still dirty, but that the middle to lower sections of the lake are clearer, and that is where he expects the deeper bite to be at its best.  “I expect to see the anglers who focus on the section of the lake from Pierce’s Cove to the dam do the best in this event,” he said.  “That’s the clearer water and where the offshore fishing has been the best.”

Techniques that will Shine
Coatney said that he has some expectations for what techniques will be the most dominant when the Elite anglers whit the water this week.  “It’s going to be deep structure that will win,” he said.  “Yeah, there are shallow patterns that will catch fish, but they won’t win.”

With that in mind, Coatney said that he anticipates Carolina Rigs with big worms to be effective, and he said that he expects big, 1-ounce football jigs to be a key player this week.  He said he has not seen a good, deep diving crankbait bite so far this year, and while he does not expect it to be a factor, wouldn’t be surprised if it became one.

He said that he thinks a dark horse technique that could play a huge role in the event would be a flutter spoon.  “I think it could be an oddball deal that produces,” he said.  “I don’t know why, I haven’t used it much this year, but I just feel like it could be a big deal.” 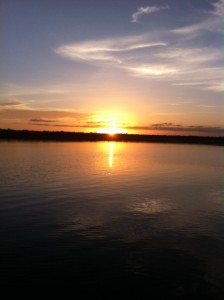 What will it Take?
He said that there have been no shortage of giant fish come out of Falcon lake this year, and with that in mind, he expects to see some heavy limits weighed in.  “It wouldn’t surprise me to see someone weigh-in a 45 to 46-pound limit during this event,” he said.  “I’m certain that several 40-pound limits will be weighed, but a guy won’t be able to do it for four days.”

He said that he anticipates it taking a 30-pound average to win the event.  “I don’t think it will be as heavy as when they were there last time,” he said.  “But, it will certainly be impressive.”

For the fans and anglers, we hope that they can produce like that.  Because it would be nice to follow up a tough event like the one at the Sabine River with the reward of big bass and bloody hands.

One thing is for certain, we’ll all be watching, because opposites do attract.