See I Told You – Size Does Matter

I have been preaching this to friends in the South for years – Size Matters!

I would tell them that they needed to jump on the big bait bandwagon. But, not too many of them would believe me fully. They would test the water with five-inch hollow swimbaits like the Strike King Shadalicious, the Berkley Hollow Belly or the Basstrix from time to time. The Big Bite Cane Thumper, the Strike King Swimmin’ Caffeine Shad or the Skinny Dipper, would get tried, but it would quickly get put down for a spinnerbait, squarebill or a jig. 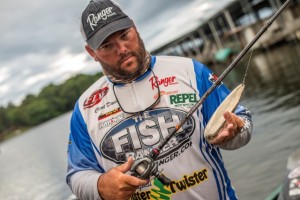 Despite Skeet Reese winning at Smith Mountain with his Rago SKT Swimmer, despite videos coming to the forefront like Southern Trout Eaters and many other indications that big baits would work, the South largely considered the usual big baits to be out of their fish’s league. Not out of their league, but rather out of the realm of possibility to get bites from the fish that live in the Southern states.

In the many times I’ve spent on the waterways of the Central and Southern parts of the country, I’ve seen baitfish as large – or larger – than the planter trout that became the main trophy bass forage of the West for so many years. I’ve seen threadfin shad as big as six inches and seen gizzard shad ten inches long as well as big shiners. Never mind the juvenile game fish that bass feed on every day that can be as long as ten inches.

The bottom line is that swimbaits are not too big for the bass in our puddles, they are too big for us to comprehend throwing.

See, for the most part, many of us fish all year and the biggest fish we might catch could be a four pounder. We see Elite and FLW Tour guys weighs sixes and sevens, trophy hunters from the West with tens, elevens and twelves, but not us. We envision ourselves as the angler who can catch a bunch of two pounders with a three or four pounder mixed in, and those are not the type of fish that eat big baits.

That could not be farther from the truth. 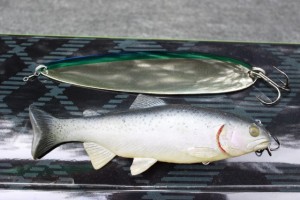 The amount of three pound largemouth caught on six to eight-inch swimbaits each year is staggering. In fact, one of my favorite lures for quality spotted bass in Califrornia – in the right setting – was an eight-inch Black Dog Baits Lunker Punker. The size of that bait brought out the ill temper in spotted bass of all sizesout there, and I’m sure it will here as well.

I’ve spent days with friends trying to convince them to pick up a six-inch swimmer, only to hear them exclaim that it is too large. My typical response to them is to take out a River2Sea Rover, a Sexy Dawg, a Vixen or a Super Spook and lay them side by side to try and show them that they already throw baits that size, so why not increase their chances?

I guess my preaching finally hit home, because when the Nichols Lures Ben Parker Magnum Spoon made its glorious National appearance on the FLW stage when three of the top 10 anglers were throwing the lure. I must admit when I saw the spoon, and looked up the specs I almost bit through my lip; the thing is eight inches long and weighs three ounces.

I know another bait that has similar specs – The Huddleston Deluxe swimbaits.

While I was at the Forrest Wood Cup Expo last week in Columbia, S.C., I got the chance to hold the Ben Parker Magnum Spoon myself for the first time, and I told the owner of Nichols Lures that I was going to be writing this story this week. The reason is that I couldn’t help but saying I told you so. 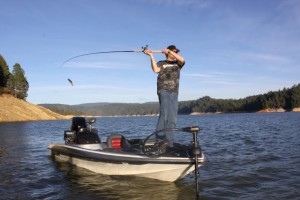 The fact that three of the top ten finishers were throwing the giant slab of metal, coupled with the fact that it matches forage that bass routinely eat and the fact that it is almost identically sized and shaped like a Huddleston swimbait or a Rago Baits BVD 3D swimbait makes me want to jump up and down and scream to the heavens for people to not only throw the Parker spoon, but to also migrate slightly West and give big swimbaits a try.

To be fair, out of the what must be tens of gazillions of Ben Parker Magnum Spoons that Nichols has sold in the past ten weeks, there are probably a fair amount of anglers who have received theirs and haven’t even tried to throw them. but, those that have experimented with them have undoubtedly shocked themselves with not only the size of fish they could catch, but also the size of fish that attack the thing that look like they have no business doing anything other than schooling with it.

I beg of you all, since you are trying your hand at the spoon, mix in a larger swimbait as well, you won’t be sorry. You are already in a steep learning curve with the spoons, and will probably spend the next year or two experimenting with it to find out when the best time to use it will be. Now is the time to do the same thing with swimmers.

You’ll be finding the best rod for casting and working the spoon, and one of those might just be a swimbait rod, so give it a chance, try and see when a big swimbait might be as great a complement to the big flutter spoon as a jig is to a crankbait.

Just remember – I told you it would work.