Learning and Growing with Justin Lucas 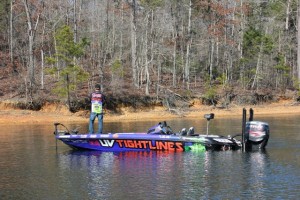 FLW Tour Pro Justin Lucas started his fishing career as a teenager fishing with his grandfather in Future Pro Tour, an amateur team circuit that has become the largest of its kind in the state, and perhaps beyond.  From the beginning, Lucas showed his ability as an angler.  He and his grandfather earned an angler of the Year Title one season, and Lucas and another angler actually won a boat in another team circuit early on.

With all of that early promise, and five FLW Outdoors wins as a Co-Angler in FLW Series National Guard Western Division and Everstart Series events, there was little doubt Lucas would be able to compete on a tour level.

But, promise is the ugly word among young athletes.  How many “sure thing” or “can’t miss” prospects have come and gone in professional sports.  The list is long, and Lucas set out to make sure he was not one of those anglers on the pro tours.

The first thing that the California transplant to Guntersville did was set out to figure out how to find fish that would help him be competitive.  “Any of us can get overwhelmed with the amount of water that re on the lakes on tour,” said Lucas.  “We only have three days to cover enough of the lake to locate fish, and it can be overwhelming.  I needed to come up with a strategy that would help me utilize the skill sets from home, and grow them out here.’ 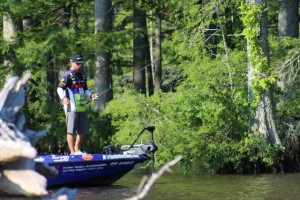 Lucas revealed that he feels that having to fish a diverse set of waters from his home area of Northern California helped set him up to be able to do numerous things on the bodies of water on tour.  “I think a lot of anglers out here work hard to try and specialize, and I think that limits the level of success an angler can have,” said Lucas.  “I look at tour anglers that have gone before to the tours and I see versatility because of the diversity of the lakes.”

He is of course referring to the differences in bodies of water from the clear, more vertical impoundments such as Lake Oroville and Shasta Lake that feature steep walls and rocky structure, to the Foothill type lakes such as Folsom Lake and Lake Berryessa that feature rocky structure, but also rolling points mixed with vertical walls, to the Delta and Clear lake; which are dominated by vegetation and shallow water.

He is also referring to the anglers that have proceeded him.  “From Skeet (Reese), Aaron (Martens) John (Murray) to Ish (Monroe), Brent (Ehrler) Brett (Hite) and onto guys like Cody (Meyer) and Chris (Zaldain) and myself; we seem to be able to fish a lot of different ways,” he said.  “Sure, each of them has strengths, but they are good enough with everything that they are rarely at a point that they can’t be competitive.” 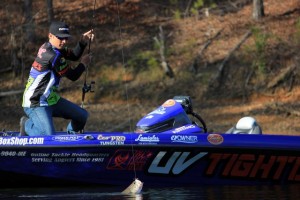 Finding a Focus
While he had to fish larger baits at home to have a chance at being competitive, Lucas found that he had to scale down once he got on tour.   “At home, if you wanted to get a top 10 with a chance to win, you had to be throwing baits that appealed to bigger fish,” he said.  “That meant big swimbaits, bigger Lucky Craft Pointer 128 jerkbaits to start, followed with lures to fill out a limit if you needed.  There were times that 20-pound limits didn’t amount to much.”

Now that he is on tour, he has learned that he needs to focus on a better than average sized fish, than focusing on the giants in the lake he’s fishing.  “I’ve really downsized my lures now,” he said.  “I still fish swimbaits; only smaller sizes, and I always have a Wacky Rig with a finesse worm tied on, as do I have a creature bait at the ready.  These baits help me locate fish, and catch them consistently during an event.”

He also tends to narrow down where he is fishing.   “Clear lake was our biggest tournament lake at home, and it was 19 miles from end to end,” he said.  “The Delta is actually bigger, but you can run quite a ways each day; it never seemed unmanageable.”

Now, with lakes that can be 75 to 100 miles or more in length, Lucas said that he tends to pare down his fishing waters as well.  “I tend to pick a section of a lake and try to learn as much as I can during practice,” he said.  “I try to find something that produces quality bites and then try to duplicate it in that area of the lake before moving to another; and sometimes I don’t ever get out of that section if things go well.” 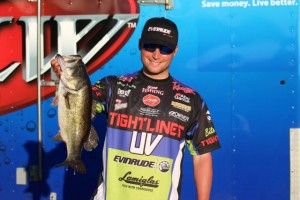 Rigged and Ready
While he said that he has multiple Lamiglas / Abu Garcia Revo rigs set up in the rod locker of his Ranger, he typically relies on a few to keep his searching efficient.  “I really have a Lamiglas Excel2 765 with a 6.4:1 Revo SX spooled with 12 to 15-pound-test Berkley Trilene 100% Fluorocarbon for throwing paddletail swimbaits at the ready,” he said.  “I also have an Excel2 735 with a high speed Revo STX spooled with 15-pound Trilene 100% Fluorocarbon, an Eco Pro Tungsten bullet weight and a Tightlines UV Hog on a 4/0 Owner J Hook all the time.”

He uses the paddletail swimbaits in four to six inch sizes as search baits most of the time.  He rigs them on a jighead if there is little grass and  an Owner Beast swimbait hook if there is a significant amount of grass.  He uses the UV Hog to fish targets by either pitching or casting.  He does have the 6-inch Tightlines UV Finesse Worm set up wacky style with some Never Slip Bait Tape and an Eco Pro Nail ‘Em Tungsten Nail Weight on an Excel2 spinning rod and 8-pound-test Trilene 100% Fluorocarbon just in case he feels the need to slow down a bit more.

“I’ve found that I can find fish just about anywhere with one of these three rigs,” he said.  “Yes, they are my sponsors’ products, which I believe in, but they symbolize simplifying your tackle and focusing on locating fish.  It has worked for me on tour.”

The Biggest Improvement
While he had a great start to his tournament fishing career at home, Lucas said that he would love to go back and start again with what he knows now.  “I fell into the trap that so many anglers do when they fish the same lakes a lot,” he said.  “I tended to go back to spots that I had caught fish on and try to re-live past success, I can’t afford to do that on tour.

“Things are always changing, and an angler has to be constantly adapting,” he said.  “If I could go back and share that lesson with myself again, that’s what it would be.  Learn to look for what the fish are doing now, and try new water that looks similar to what you have been doing well on.  Those can make a big difference.”