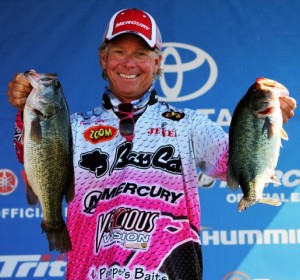 Kevin Short, is a 5 time B.A.S.S. Tournament Champion entering his 14th year as a professional angler. Known to Bassmaster fans as “K-Pink”, Kevin is a tough competitor recognized both for his larger than life Hot Pink jersey and Bass Cat boat, as well as his outgoing personality and sense of humor; and in 2014 overcoming great odds to make the cut for the 2015 Bassmaster Classic, his third appearance at the event.

“Mustad is very pleased to have a man of Kevin’s energy and character on our team; his knowledge and experience is a great asset. When you attend a Bassmaster Event you can easily see the appreciation that the fans have for him,” says Mustad Sales Manager Steve Tagami. “The inner strength Kevin has shown in dealing with a major personal catastrophe in the loss of his home, and to work through it with such a positive outlook commands great respect. To come back after that with two consecutive top ten finishes in a row is inspiring.”

”I have been using Mustad hooks for many years and am happy we can work together,” says Kevin. “Whether fishing the Bassmaster Classic or just for a day of fun, one of the most important things to do is control all the variables I can to maximize my catch. I know when I tie on a Mustad hook, I’m using the sharpest, strongest hooks I can get and that’s one less thing for me to worry about.”