Pre-dawn at the second day of the Bassmaster Elite Series event on Toledo Bend was one of rushed apprehension under an intense and ever changing sky. Yet it should be no surprise that three of the pros setting inside the Top 15 of the standings share a relaxed attitude centered on smiles.

Rain fell on those who were first in the launch line like Fred “Boom Boom” Roumbanis. But … no matter how unloving the weather may be, Fred is never alone at morning take-off. Wife Julie and young son Jackson are fixtures at every Bassmaster Elite Series launch. Today is no exception. Amid the gloom and rainy outside, is a party on the inside. Jackson sits grinning in a car seat barefooted and eating Apple Jacks – dry – no milk necessary. However, music is a must for Team “Boom Boom.” 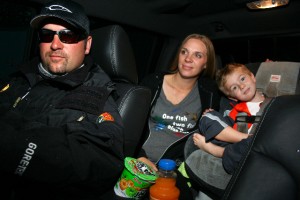 So between gulps of an energy drink, Freddy, a Californian to the core who now lives in Bixby, Oklahoma, switches from thoughts about catching another monster 21-pound limit to playing the role of club disc-jockey. “It’s Tricky by Run-DMC is Jackson’s all-time favorite song, so we always play that in the mornings for him,” says Freddy, before switching over to Johnny Cash’s 1963 gem, you guessed it, Jackson.

Julie describes Freddy as a generous spaz of a dude who thinks of fishing constantly –generous to a fault sometimes. It appears to be a very accurate assessment, and the one thing that sticks out among this family of three, with one on the way, is happiness, the rare kind of happiness that all of us want, and most never totally find.

“In 2006 and 2007, we were pretty much living like homeless vagabonds, and it didn’t bother us one bit, we loved it, we were happy, we were just fishin’,” says Julie in a cheerful tone. Happiness works. Freddy won upwards of $300,000 that season, and considering his top-of-the standings position in this tournament, indeed among Apple Jacks, energy drinks and great music, it’s happiness that’s working best even as rain falls outside. 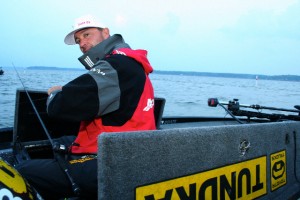 When the rain thankfully ceases a few minutes later, 2004 Toyota Tundra Bassmaster Angler of the Year, Gerald Swindle sits tying a spinnerbait to a Quantum Smoke rod and reel combo, and of course, making all within earshot laugh. “After I saw that forecast for 30 mph winds today, I told my wife ‘Lulu’ to get the ibuprofen ready cause it’s gonna be a little lumpy-bumpy out there today,” says Swindle, whose lanky, athletic, 41-year old frame has endured numerous back surgeries.

As the sun finally shines, several pros sit stuck and frustrated in an exceptionally slow-moving launch line as anglers with early take-off positions are all ready running down lake to their fishing holes. Near the back of the line, Casey Ashley is not among the frustrated. Instead, the laid-back South Carolina pro with the million-dollar smile and a voice that Nashville is listening to closely sits grinning through the open window of his Toyota Tundra. He’s listening to Kenny Chesney, and the song couldn’t be a better match to Ashley’s beach friendly demeanor. It’s Chesney’s Nowhere to Go, Nowhere to Be. “Nah, I ain’t in no hurry, I’m just goin’ fishin’.” — An outlook that lead Ashley to an awesome 18-pound limit yesterday. 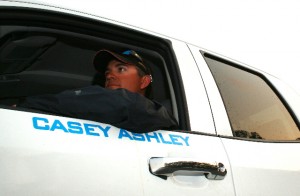 It’s an attitude that should serve Ashley, Swindle and Roumbanis well today … where strong winds might blow away the day for anglers spooled a little too tightly.