When a new technique or revolutionary product hits the fishing industry; the learning curve is steep. What occurs is that anglers everywhere pick up the new item and start training themselves how to use it. Of course, each of the new products start with people learning the basics of it, then they become more proficient and experimentation starts.

Such is the case with the Alabama Rig styled baits – The Five Wire. 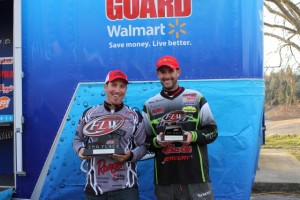 When Paul Elias won the FLW Tour event at Guntersville in October, everyone said it was a suspended fish approach only. “Throw it just like you would a spinnerbait – just cast and reel;” that was another common phrase heard about the rig. We also heard that it was for stained to dirty water; bass in clear water got too good of a look at the whole thing and they won’t strike it.

Which of these are accurate? Truth be told, we don’t really know yet, but the more that anglers begin to throw it, the more we learn about it. Such was the case January 26 to 28 on Northern California’s spotted bass factory, Shasta Lake when a reported eight of the top ten pros were tossing a Five-Wire.

The event didn’t start out that way. Shasta is known for its finesse fishing. Darter heads, dropshots rigs, four and six-inch hand-poured worms are the norm at the reservoir. Mix in the deep football jig, a decent jerkbait bite and occasionally the swimbait bite, but Shasta is largely a light line angler’s paradise.

When Zack Thompson, a former Bassmaster Tour pro, and Matt Newman, Western FLW Tour pro – road roommates – began taking the lake by storm with a Picasso School E Rig, it didn’t take long for the word to spread. Thompson and Newman finished second and fourth, and the whole event was a learning experience.
We caught up with Newman to find out what he learned during his week.

Practice
Newman; from Agoura Hills, Calif., the owner of iRod Fishing Rods, reported having a difficult practice for the event. Shasta is a high elevation body of water, and in early season tournaments, cold winds, rain and even snow can be the norm. he said that he had discussed tossing swimbaits to try and locate fish in practice, but had abandoned that for fishing a deep jig. 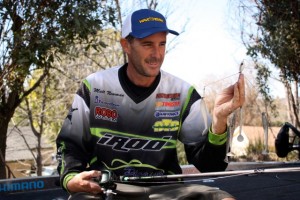 It was during the second day of struggling that he and Thompson connected by phone to discuss the difficulties that they found out they were near each other in the same river arm; they met to strategize. “While we were talking, I told Zack that I thought we needed to try and work a little faster to locate fish, then figure out how to catch them,” he said. Zack went around the corner, and I continued down the bank.”

Newman said that he picked up theSchool E Rig and after a couple of casts, he got a bite – he thought. “I wasn’t sure, because it was the first bite I’d had on the rig on Shasta,” he said. “So, I moved over the top of where it happened to see if it was a tree, and there wasn’t anything there.”

Each moved down opposite banks of the same channel, and when they had gone almost a mile and a half, they had each caught three more fish; they decided to move areas. They tried them the next day; the final practice day, but did not find anything to make them focus elsewhere.

Tournament Conditions
The first day of the event was a rainy low pressure day, so the School E Rig was fished shallow because the fish were chasing. Newman reported catching 25 to 30 spotted bass on the Rig. The next day was a post front day, and bites were harder to come by. Newman said that the bluebird skies and 35 mph winds made fishing tougher, and the bass less cooperative. The final day of the event saw bluebird skies again, but with strong, although reduced winds in the 20 mph range. 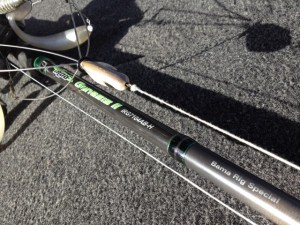 Adjustments
On the first day of the event, Newman said that fishing the rig was fairly simple. “I really focused on keeping the rig up in the water column,” he said. “I fished it near the shore and above standing timber in 100 feet of water; all of my fish came in less than 10 feet of water.”

With the post front conditions of day two, Newman found fishing to be slower. He found himself not able to get bites in the tree tops, nor on the bank, with the exception of random fish he caught off of steep rock walls. He discussed the day with Thompson afterward, and found that Thompson was able to get more bites by letting the School E Rig sink deeper; counting it down to achieve the proper depth.

On day three, Newman started shallow again, but after catching a pair of random two pounders, he turned to a deep flat and begin counting it down. He found that when he allowed the rig to pendulum into 60 feet, he was able to make the fish commit. “I experimented with the depth by watching my fishfinders,” he said. “I could see the fish coming off of the bottom toward my School E Rig, but they wouldn’t come all the way to it until I reached 60 feet over that flat.”

Retrieves that Worked
Newman found two retrieves that produced keeper bites for him throughout the tournament. “On the first day I used it like a spinnerbait,” he said. “With the cloudy conditions, and about four foot of visibility in the water, I would throw it out and retrieve it near the tops of trees or around the bank; fish would come up to eat it.”

The deep water approach was a little more scientific. He said that the rig tends to come up at an angle towards the boat on a steady retrieve, and because he was needing the rig to get as deep as 60 feet, he learned that he needed a slow pendulum retrieve to get to the strike zone.

“It was a feeling really,” he said. “I would make as long a cast as I could and let the rig start falling. I used the reel to gather slack more than anything. It got to where I could make the long cast, and count it down then start pulling in a little bit of slack with the rod tip held high and just gathering enough line to feel the weight of the rig falling forward.” he said once the lure came under the boat, he would reel it up and make another cast.

Rig Setup
He tried several different setups to find the right way to arrange the jigheads for peak performance. What he settled on was a staggered weight and size of heads and baits that helped him dial in. “I had 1/8-ounce heads on the two, three-inch teasers on the top wire, a 3/16-ounce head with a five-inch bait on the middle wire and 1/4-ounce heads with five-inch baits on the bottom two wires,” he said. “That setup kept the rig running smoothly and always made sure that the bigger baits with hooks were in their face as they came up to strike.” (California regulations allow an umbrella rig to have three lures with hooks and two additional attractors to be used on one line).

He used a new rod that he and his iRod pro staff have been developing, called the Bama Rig Special. The rod is a 7’10” rod based on the backbone of his original Jr. Swim. blank. “We used the backbone of Jr. swim blank, lengthened it two inches,” he said. “We made it have a light tip so that we could work the rig deftly, but still have enough backbone to toss a heavy rig and deal with the potential of handling big bass or multiples.” He said the rod would ready for delivery soon.

He used a Shimano Curado 200 in 6.5:1 retrieve speed and tied the rig to 65-pound-test Izorline Spectra braided line. For baits, he used several different lures. He tried Keitech Swing Impact and several other swimbaits, but finally settled on the prototypes of new baits and heads that Picasso lures is working on. 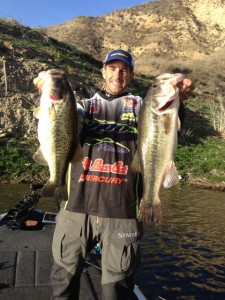 One tip he offered anglers is to use hooks that you can straighten on a dead pull. “I found out that the really heavy, Flippin’ Style hooks made it really hard to get a snagged rig back,” he said. “I settled on a medium wire hook so that I could pull it open on a straight pull, but was still strong enough to handle the battle with a big fish. Picasso thought of that when they were making their jighead prototypes, and it saved me a couple of times.”

Closing
While he had tried the School E Rig with limited success on lakes near his Southern California home prior to heading to Shasta, Newman had not yet managed to figure out the keys to catching bass on the rig. Since the Shasta event, he has returned to his home lakes and has found that what he learned at Shasta has helped him improve his success there as well.

“It’s really made a difference to have spent that week trying new things at Shasta,” he said. “I’ve gone out at home and have caught some good fish by applying some of the same things I used up there. I really think we’ve only just started learning the rig, and I can’t wait to see where we can take it.

“I think it’s like anything else; we need to push it, learn as much about it as we can, and we’ll find new things we can do with it. I’ve learned a lot in a short time, and I’m enjoying it; it will be interesting to see what we know about it a few months from now.”