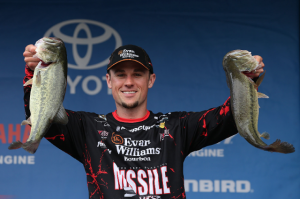 Sunline America is pleased to announce that John Crews has joined their Pro Fishing Team for 2015. John is an accomplished professional angler with a proven track record for success. John competes on the Bassmaster Elite Series and is currently the 19th ranked angler in the in the Bassfan World Rankings. John joins one of the most decorated pro staffs in professional bass fishing with Sunline America.

“John brings a unique perspective and skill set as a professional angler and fishing industry insider. He will make a great addition to our staff and we look forward to having him on our team for 2015,” Nobuyuki Kajio, President of Sunline America.

“Sunline is the best line you can use. Since designing many of the baits I fish with, I have become very picky in my whole fishing set up. I want the best everything. Sunline definitely allows me to know my line is not going to let me down, whether it is 12 pound FC Sniper on a Little John or 22 pound Shooter on my trusty D Bomb. Having superior line also lets me make longer and more accurate casts, which is something nobody thinks about.