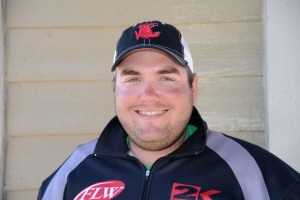 Big Bite Baits announces that Michael Neal joins their Pro Angler Team for 2015. Michael is a recent college graduate and proprietor of Dayton Boat Dock in addition to fishing the FLW Tour and Bassmaster Opens. At his young age, he has a strong understanding of pro angling and the fishing industry. Michael finished the 2014 FLW Tour ranked 7th in the Angler of the Year points and has accumulated four top 10 finishes in the past two years along with two FLW Cup appearances. He joins Jeff Kriet, Russ Lane and Dean Rojas on the Big Bite Team.

Scott Montgomery, VP Big Bite Baits says “Michael has had an impressive start to his pro career and is very professional in all his actions on and off of the water. He is a great fit to our team and we look forward to being a part of his continued growth in 2015”.

“Big Bite is the most versatile plastics company right now. They make winning baits that catch bass from shallow water to deep off shore structure. I look forward to working with them on new baits and colors to continue that versatility,” says Michael Neal.