The 2012 Bassmaster Classic is complete, the final standings are in the record books and the champion; Chris Lane, is on his victory lap. The press releases have been drafted and broadcast, and the high level details have been retold, but we at Advanced Angler want a little more.

But, that’s only a look at the story. We look to go in depth with the top finishers; those who carved their day in the spotlight and challenged for the victory. While we will get the down and dirty details with many of the top finishers. 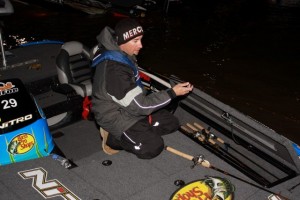 While he had already established himself as a force to reckon with on the FLW Tour; Ott Defoe brought his act to the Bassmaster Elite Series and quickly made his mark. In his “rookie” year on the Bassmaster Elite Series, Defoe won the Rookie of the Year title, finishing fourth in the Toyota Tundra Bassmaster Angler of the Year Points Series. At the end of the 2011 season, Defoe won the 12 man Toyota Trucks All Star Week.

In his first Classic, Defoe would continue to show his angling prowess with a strong showing.

Practice
Defoe spent three days at the Red River in November before the waterway was declared off limits to competitors. Like the others, his intent was to comb the water way for backwater areas that would serve as good spawning areas for bass in the time period of the Classic.

But, before he made the trip, he spent copius amounts of time combing over the web tool, Google Earth looking for skinny areas to target. He found plenty, so he planned to get dirty. “I took my aluminum boat down there to pre-practice with so I could check areas I wouldn’t be able to in my Nitro,” said Defoe. “I rode around quite a bit, but I also spent some time fishing, and I found a few areas that I thought would prove to be good for the Classic.”

He found three areas that peaked his interest, and one of them actually became one of his primary areas in the tournament. The other area he planned in checking was one he had fished in prepration for an FLW Tour event the year prior; that area is known as McDade.

He took his aluminum boat for the first of the three official pre-practice days for the Classic because he wanted to be able to access backwater areas more easily than in a bass boat. He went into several of them, but only caught a few small keepers. He went into McDade that afternoon, and within and hour he had caught four keepers; one of them a five pounder on a #5 Rapala Shad Rap.

“I knew McDade was a place I could catch a limit,” Defoe said. “I also knew it might be a place that I could catch a couple of big ones.”
Rain greeted the anglers on the second day of practice, and had it not been for a camerman being scheduled in his boat for b-roll footage; Defoe said he would not have even gone out. “I went to a few small areas at the bottom of Pool 5, but never got anything,” he said. “It proved to be a fruitless day fishing wise and I was off the water by 2:00.” 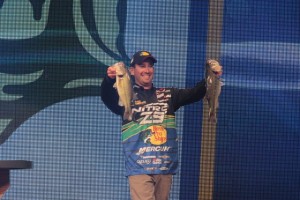 He said his third practice day was an adventure. He started the day in his Nitro bass boat, then went to backwater area that he wanted to check after seeing it on Google Earth. So, he returned to pick up his aluminum rig and attempted to get in. He found the entrance to be too tight, and got stuck.
“It turned out I was stuck on some pallets,” he said. “I spent an hour getting them out from under my boat so that I could get into the pond; then when I did; the whole back end of the pond I’d wanted to fish was blocked by a big log jam.” He returned to the launch around dark.

On the official practice day, he checked the area known as White House without a bite, then he returned to McDade to see how many boats were in there, and was pleased to only find four or five. He caught a few bass on the Shad Rap, then went to the other area he had seen on Google Earth in November and flipped it with a Pit Boss; catching a couple in the process. He had his water selected for the event.

Day One
He elected to start in McDade. After takeoff, he headed all the way to the back, but the boat in front of him was fellow competitor randy Howell; who went there as well. “We went to a culvert in the back of McDade; Randy picked the right side, and I went left,” he said. “We both caught one initially, but then Randy started catching them one after another. I couldn’t sit there and watch it, so I started fishing the banks.” He managed to catch a limit by 10:00 with his Shad Rap off of little flat spots and points.

He left at 1:15 and headed to his small; no name, backwater. he flipped his Pit Boss in and caught a 4-pound, 14-ounce fish. He put his Power Poles down to cull and when he was done, he moved 10 feet. On the next flip, he caught a three pounder; culled and caught another three pounder. After one pass through the pond, he tried a couple other small areas, then headed to weigh-in.
Day One – 16 pounds, 6 ounces – fifth place – 1-pound, 7 ounces behind day one leader Keith Poche. 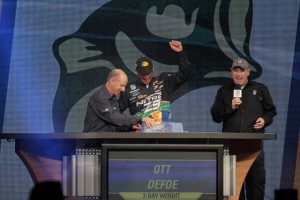 Day Two
He went back to McDade on the second morning and had another small limit by 9:30. He caught the first four on a Shad Rap, then proceeded to “catch them lights out on a Rapala XRap jerkbait.” At 11:30, he returned to his no name hotspot from the previous day and got a bite on the Pit Boss immediately; which he missed. After not getting another bite in there on a Flippin’ Stick; he noticed bass busting in the middle.

“I don’t know if it was because of my Hydrowave, but there was a lot of activity in the middle,” he said. “I picked up a spinnerbait and a bladed jig and caught a bunch; but, they were no help.” He returned to McDade, but was unable to upgrade before heading to weigh-in

Day Three
He returned to McDade; largely because he felt concerned about his other area, and again managed a quick limit on the Shad Rap. After he had his limit, he began expanding on his area by using the jerkbait as a search bait while he scanned for bedded fish.

He caught one on the jerkbait and simultaneously located a fish locked on a bed. After landing the first fish, he returned to the bedded fish; made one flip with a Terminator Jig an caught the fish. He then decided to head to his other area at 10:30.

I went in there and caught a couple small keepers on my first pass,” he said. “Then, I caught a two and a half, a six pounder, a three pounder and another three and a half pounder in a 45 minute period.” He reported catching several other fish, but none that would help. 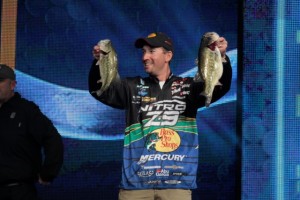 The Aftermath
“After my bad day two, I knew I had to catch 23 pounds or more to win,” said Defoe. “It can happen there, but I needed two more big bites to do it. I pretty much set out to try and climb as high as I could.

“I told my wife Jenny that I really was looking for a strong finish in my first Classic,” he said. “It would have probably been too much to win in my first Classic; especially when I consider the guys like Gary Klein who have fished so many without a win.

“I’m happy with my performance overall, and I’m happy for Chris (Lane),” he said. “But, he could probably give us a break in Florida the next couple weeks.”