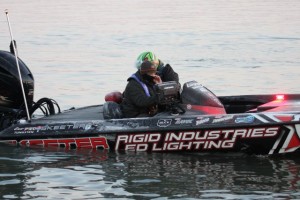 Some athletes seem to be at their best when they arrive on the biggest stage.  The World Series makes heroes out of ordinary role players, the third option receiver becomes the star of a Super Bowl, and in bass fishing, sometimes the big events bring out the ultimate performance of good anglers.

Brandon Palaniuk seems to be one of those anglers.

Let’s refresh, before he burst onto the world stage at the 2011 Bassmaster Classic, he made his presence known by winning the 2011 Bassmaster Federation Nation (now B.A.S.S. Nation) National Championship.  He showed uncommon poise, historical perspective and skills in claiming fourth place at his first Classic in New Orleans.  He re-qualified for the 2012 Bassmaster Classic through his rookie year in the Elite Series, but struggled; finishing 48th.  Then, finished second in his third Classic after earning a berth in the event by winning the TroKar Quest Elite Series event in 2012.

Palaniuk seems to rise to the occasion in big events, and here is how he did it at Grand Lake.

Pre-Practice
Palaniuk said that his pre-practice and scouting for the 2013 Bassmaster Classic actually started more than a year earlier in February of 2012.  He said that he wanted to have some on the water experience that was more commensurate with the actual timing of the event.

“I went for four days last February, and one of the spots I found during that trip ended up becoming the basis for my whole pattern during the Classic this year,” he said  “The first spot I stopped on after launching at Martin’s Landing was at the mouth of Echo Bay.  The first fish I caught there was a five pounder.”

Palaniuk would visit that site each morning and afternoon on that initial visit and said he got encouraged by what he found.  “Every time I would stop on the spot, I would get some feedback,” he said.  “Every time I went back there, I would catch quality fish, so I knew they lived there.” 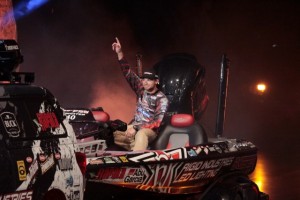 He would start to look at the area as something he should rely on, and then when he visited in October, during the fall scouting season, he caught more fish there, and found some similar areas to go with it, so he was starting to formulate a plan.

“After having so much success on the spot, I started turning on my Lowrance units and studying the area on the Navionics chips,” he said.  “The spot was a spawning flat that had a channel that ran directly from the main river channel, and it had some rock and brush on the break.  I started searching the charts for more areas like that.”

Practice
After arriving at the lake for the official practice period the week before the tournament, Palaniuk stopped on his primary area first; and for the first time, got no bites.  He went to start searching other areas, came back at noon, slowed down and caught a two and a half and a four pounder.  “The water was cold, and I figured that I needed to slow down a bit,” he said.

After his stop there on the first afternoon of practice, he went to check other areas he had discovered that had his three main components, and never went back to his area in Echo Bay.  His search during practice would produce eight areas that had his three key components; the ditch, drain or creek that originated at the main river channel and filtered onto a spawning flat.  The top of the channel topped out at three feet, then dropped significantly into six feet, and the break had basketball sized boulders or brush on it.  “They were subtle, and I felt like a lot of guys would overlook it,” he said  “I felt really good about what I had found.”

He felt so good about his primary area, that nine of the bass he weighed in the event would come off of his main area in Echo Bay, three came off of his secondary spot across the lake from his main area and the remaining three; including his biggest fish of the event, came on a spot near Horse Creek that he found during his October scouting trip.

Day One
With all of the faith he had in his primary area, Palaniuk decided to start on a secondary spot.  saying that he felt the water would be a little cold, he decided to visit somewhere else, rather than risk tarnishing his primary area with the excitement of the first morning of the Classic. 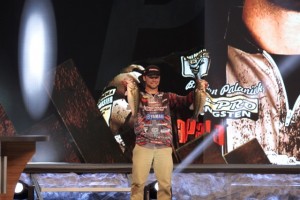 Instead, he ran to a backup spot, and caught three fish on jerkbaits; one of which would make the ride to the BOK Center for weigh-in that afternoon.   After catching those three fish, he returned to Echo Bay, and caught four more bass that were each three and a half pounds or bigger.

Knowing he had around 16 and a half pounds in the livewell with ah hour and a half left in the day; he left Echo Bay.  “I had a decent day, and didn’t want the anglers in the first flight to see me on my best water while they were returning to check-in,” he said.  “So, I left the area.”

He caught seven keepers, culled twice and ended up with 16 pounds, 10 ounces and 11th place after day one.

Day Two
For the second morning of the event, Palaniuk started on his primary area in Echo Bay.  However, when he got there, and the wind was slick calm, and the water still cold, he felt like he needed to make an adjustment.  Instead of starting with the jerkbaits that dominated day ne, he picked up a Shaky Head.  “I just really felt like the fish were sucked to the bottom in those conditions,” he said.  “So, I thought that it would be best to try and finesse them into biting.”

He caught three good ones in Echo Bay, then ran across the lake to Carey Bay and caught two more, a three and a half pounder on the Shaky Head, and a four and a half pounder on the jerkbait.  With a solid limit in the box now, he ran down lake to Horse Creek to a similar spot he had located in his October scouting period, and caught a 5-pound, 2-ounce kicker on the jerkbait.  That was the last fish he would catch on day two.

He had again caught seven keepers, culled twice and weighed 19 pounds, 10 ounces for the day.  His total weight now at 36 pounds, 4 ounces, good enough for second place.  However, his margin behind the leader Cliff Pace, sat at seven pounds.

Day Three
Armed with a Shaky Head again, Palaniuk returned to Echo Bay, and within moments, had a two and a half pounder in the boat.  But, the more he looked at the conditions, he assessed that the lake was two degrees warmer, and the wind was blowing into his bay.  With a gut feeling calling at him, he tied on a Wiggle Wart crankbait and started slowly crawling the bait across the rocks.

Within five casts, he had a three pounder in the boat, a few more casts, and he caught a four pounder, then a three and a half pounder a few casts later, and he had four quality fish in the livewell of his Rigid Industries Skeeter. 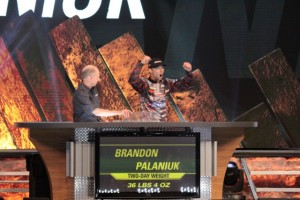 Wanting to give Echo Bay a little rest, he ran across the lake to Carey Bay, and using the Wiggle Wart, he made the same cast that he had made with a Shaky Head the day prior.  On his first cast, he got hung up in some brush, and freed the lure.  On his next cast, he hung the lure again, and wasn’t able to shake the lure free.  So, he resorted to grabbing the line and using the “bow and arrow” trick to try and use the spring of the rod and the line to free the bait, when a fish struck as the lure broke free.  He landed that fish; another three and a half pounder and he had his limit in the boat.

He moved around some more within his areas, alternating between the Shay Head, Wiggle Wart and jerkbaits.  He lost one decent fish on the Shaky Head, and caught three more small keepers before his day would end.

He would catch a total of eight fish, bring 15 pounds, 4 ounces to the scales for a total weight of 51 pounds, 8 ounces to land in the runner up position at event’s end to Pace.

Techniques and Equipment
Palaniuk caught his fish on three techniques and four lures during the event.  He used a chrome yellow perch Storm Twitch Stick and a gold Rapala XRap 10 as his jerkbaits.  He threw his jerkbaits on a prototype 7′ medium action Abu Garcia Veracity Rod, an Abu Garcia Revo MGXtreme 7.1:1 reel and 14-pound-test Berkley Trilene XT line. 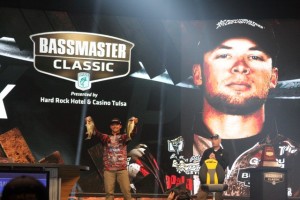 Hindsight
Palaniuk said that he has no regrets, despite the fact that he finished second in the tournament.  “The truth is, I just got beat, and that makes it a lot easier to swallow,” he said.  “I fished the way I wanted to, it was different than everyone else, and I got all I could out of it.  I only lost one fish all week, and I really don’t think it would have helped me much at all, so I have no regrets about the week.

The only thing I would have liked to changed having had a week to look back is to fish a little bit more new water on day three; other than that, I’m pretty happy with the way I performed.