Toyota Extends Sponsorship of B.A.S.S. through 2020

BIRMINGHAM, Ala. — B.A.S.S., the world’s largest fishing organization, and Toyota have renewed their longstanding, 16-year partnership for four more years. An exclusive sponsor of the B.A.S.S.-owned Bassmaster Tournament Trail since 2004, Toyota will continue through 2023 as a Platinum-level, exclusive Automobile/Truck and Mobility partner. 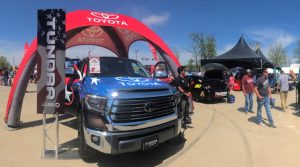 Toyota Extends Sponsorship of B.A.S.S. through 2023

“Toyota is thrilled to continue our exclusive partnership with B.A.S.S. into 2023,” said Matt Ozawa, engagement marketing manager, Toyota Motor North America. “What began as a partnership to help launch the Tundra 16 years ago has evolved to Toyota now serving as the Official Vehicle of B.A.S.S. It’s truly a great fit for Toyota and continues to excite fans across the country.”

“B.A.S.S. is looking forward to four more years with Toyota,” said Bruce Akin, CEO of B.A.S.S. “This partnership will give Toyota elevated exposure to our growing audience of the world’s best bass anglers and fans, who learn about Toyota onsite at our events and through our award-winning media properties. Plus, our angler competitors are excited about the opportunity to continue participating in the Toyota Bonus Bucks program.”

Besides its strong presence at Bassmaster events, Toyota will continue garnering prime visibility in B.A.S.S. multimedia platforms. They include Bassmaster Magazine and B.A.S.S. Times, the popular Bassmaster.com website, Bassmaster social media and the award-winning TV show, The Bassmasters, which airs on ESPN2 and The Pursuit Channel.

About B.A.S.S.
B.A.S.S. is the worldwide authority on bass fishing and keeper of the culture of the sport, providing cutting edge content on bass fishing whenever, wherever and however bass fishing fans want to use it. Headquartered in Birmingham, Ala., the 510,000-member organization’s fully integrated media platforms include the industry’s leading magazines (Bassmaster and B.A.S.S. Times), website (Bassmaster.com), television show (The Bassmasters on ESPN2 and The Pursuit Channel), radio show (Bassmaster Radio), social media programs and events. For more than 50 years, B.A.S.S. has been dedicated to access, conservation and youth fishing.