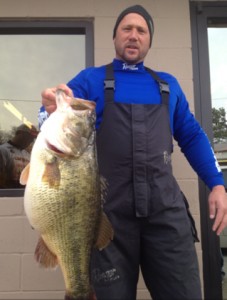 Grove, Okla., Grand Lake O’ the Cherokees and the greater Tulsa area has been in the public eye of the bass fishing world for most of the winter.  With the competing of the 43rd Bassmaster Classic happening less than three weeks ago, and the fanfare that surrounded that event; the focus of the fishing world was justifiably on that region.

One local angler did his best to keep the focus squarely on Grand Lake for a little while longer the week after the Classic champion had been crowned.

On Sunday, March 3 – the week after Cliff Pace became the king of bass fishing for a year; 43-year-old Sand Springs, Okla. resident Billy Lemon became the Grand Lake King, until someone breaks his record.

While competing in a Nichols Marine Team Tournament Series event with his partner Corey Smith, Lemon became the king of the lake when he caught the new lake record largemouth bass when he boated a 12.3-pound, giant that bested the former lake record of 10.9 pounds; that fish was recorded a little less than a year ago.

While catching a lake record may be reward enough, the behemoth was the anchor to a 24.95-pound limit that helped Lemon and Smith beat 293 other boats in the event, and earn them a new Triton bass boat for their prize – along with a $1,000 bonus for the biggest bass.

we got the chance to talk to Lemon about the fish, he was willing to share with us the details of the catch, and let us get to know him a little bit.

Getting to Know Lemon
First of all, while he loves fishing and competing in tournaments, Lemon will be the first to tell you that it comes second in his life to his wife of 22 years, Angel, and their two children; 20-year-old son Levi and 18-year-old daughter Lacey.  “I fell in love with fishing tournaments when I was 20 years old, and I would have loved to have been able to make a career out of it,” said Lemon.  “But, I probably didn’t put myself in the right position early in my career, and by the time I started fishing the right events, the kids were young, and I didn’t want to make my family take a backseat to anything.”

Now that his kids are grown, Lemon said that he is making a run at trying his hand at it again.  With the support of his company; he is a salesman at Webco Industries,  which sells tubing to the gas and oil industry, he is going to enter the Bass Pro Shops Central Opens in 2013 and see if he can’t give himself a chance.  “I feel great, and I can still fish as hard as I want to,” he said.  “Plus, Angel and the kids are behind me in this, so I’ll try to see if I can make a go of it.”

In case you were wondering, the 12.3-pounder is his personal best.  Prior to that, he had caught an 11.5 pounder while on a trip to Lake Guerrero in Mexico. 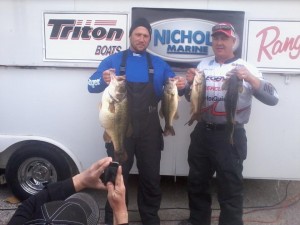 The Catch
He said that the day didn’t come easily, as they were competing in the event,  he reported that the lake record became the team’s second fish between 11:00 and noon that day.  He and his partner had boated a  five and half-pound fish before the big fish struck.  “We were in Duck Creek, and we were running the pattern that we had established, but it was taking a while to put things together,” he said.  “She was our second fish, and we filled in with smaller fish for two hours after, but she obviously was the bulk of the sack.”

Lemon said that he made a cast with his Yumbrella Rig and Gene Larew Sweet Swimmers near the bank when she bit.  “I actually felt her slap it before she loaded up on it,” he said.  “Once she did, it was kind of like pulling in a big snag.  She really didn’t trash around too much or put up too much of a fight, she just kind of loaded up my rod and rode into the net; the whole thing took about 20 to 30 seconds and it was over.”

Lemon said he knew he had a giant fish, but after he and Smith celebrated for a moment, he told his partner that he thought she weighed between nine and ten pounds; they high-fived each other and did what any other seasoned angler would do – went back to work.

Another boat was nearby, and asked them how big the fish was.  Lemon said he didn’t know, so the person told him that he had  a digital scale in the boat, did they want to borrow it.  Lemon politely declined and said they needed to get back to filling their limit.

They did of course, and would eventually win, and he shares with us the details of the pattern he has used to catch that bass, and many others using the castable umbrella rigs.

Equipment and Rig Setup
Lemon reported using a 7’4″ heavy action Shimano Cumara rod that he matches with a Shimano Curado 200 G7 reel spooled with 65-pound-test Power Pro Super Slick braided line.  “This is the perfect setup for throwing the Yumbrella rig,” he said.  “The rod really has the right action to cast the rig, with the right tip to allow the fish to load up, and the reel is the right combination of speed and power.  Of course, you need to use braided line the way I fish these things, otherwise I’d lose a bunch of them.” 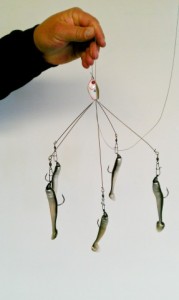 He said he likes to spread the wires on his Tennessee Shad colored Yumbrella Rig out, then put 1/8-ounce High Tide jigheads on the clips, then rig up five of the Larew Sweet Swimmers; this time in Alabama Shad color.  “They are the perfect profile for any baitfish out there, and they swim at the slowest speeds because of the tail design,” he said.  “I really believe that my success with the rig has come because of the Sweet Swimmers, as much as where I throw it.”

He also said that having some wind is definitely a plus.  He reported that a stiff wind blowing directly onto the points or banks that you are fishing will amplify the rig’s effectiveness.  “If the wind is blowing enough to push the bait around, and blow dying shad into the pockets, that’s the best conditions.”

That being said, he prefers to fish them in water lower than 50 degrees, but said they maintain some of their effectiveness up to 55-degrees.  He looks for points that lead directly into a spawning flat that intersects directly with the channel that runs through the  pocket.  He said those are the elements that make the rig the prime tool for the job.

Once he locates that scenario, he positions the boat in at least 20 feet of water, casts into the shallows and slowly creeps the rig along the bottom; much like slow rolling a spinnerbait.  Once the rig pops free of the top of the break is when he often connects with the fish.  “In that cold water, they suspend over that channel off the edge of the points,” he said.  “Occasionally – as happened with the big fish – they will move onto the point, or flat to feed, but usually, I catch them over the channel suspended down 10 feet or so.”

After the Event
Lemon reported that they weighed in for the event, then took the fish to Littlefield’s Sporting Goods to have it certified, met with the Oklahoma Department of Wildlife, then took the fish back to the tournament’s live release boat to be returned to the lake alive.

Lemon said that he has been a little surprised by the attention after the fact.  “I’ve had people stop me at my next events wanting to hear the story, and I even got stopped by three people in a local Walmart the other day,” he said.  “I was putting a new battery in my boat, they recognized me and wanted to hear the story; it’s been pretty cool.  I’m not used to it, but it’s been 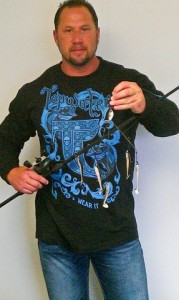 He said he’s also enjoyed meeting people at the manufacturers whose product he used to make the catch.  “The marketing manager from Shimano called and said congratulations, and I got to go meet Chris Lindenberg and Gary Dollahon at Gene Larew,” he said.  “They’re actually going to make a 360-degree reproduction of her, and I gave them the rig and baits I used to catch it for the display.  It will be displayed at shows, at their offices and some of their retailers as they make appearances.  I got to see their whole operation and I really enjoyed myself, they are great people.”

He has also experienced success after the big fish as well.  He won an FLW Walmart BFL event on Grand Lake this past Saturday, March 9 using the same pattern.  His winning weight was 19 pounds, 11 ounces, and he said he didn’t think he had enough for a check when he returned to the weigh-in; he won by nearly three pounds.

“I’ve really had a lot of fun the past few weeks running this pattern on Grand Lake,” he said  “I guess it was bound to leak out anyway, so I thought I’d share how I caught her, and have done well with the Yumbrella Rig and Sweet Swimmers; hopefully it will help people catch more fish themselves.”

Hopefully, for him, it won’t be on Grand Lake, and may they all be smaller than 12.3 pounds – for the sake of his generosity.