Learning How to Hydrate for Fishing

I’ve discovered something this week that I thought I was doing well, but found out that I had been way off the mark.

I’ve never done a good job of hydrating my body – for life – let alone for what I do for a living. 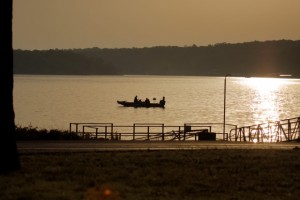 In the past, I would come home from events I fished, or those I covered completely drained. I would fish a two-day event and come home sore, tired and sleep until noon the next day, get up, eat something, stay awake for a little while, take a nap, then sleep 12 hours that night; because I had to. The same would be said for covering any event from two to four days.

Then, I would cover a Major League Fishing event – as I am this week in Tennessee, and six days on the water would completely deplete me. It would take me a few days to recover from that.

I found out this week that a lot of it has been about my lack of hydration.

At an event like this, I typically average four to five hours of sleep. While I am up at 3:30 to 4:00AM, I’m on the water taking pictures until competition ends at 3:30 to 4:30PM, wait to do the wrap up video interviews with the anglers and then ride 30 minutes to an hour with my boat official / camera boat driver to the hotel. I then file my photos and videos, grab something to eat, return to the room, do my work for AdvancedAngler.com, post the story, shower and try to be asleep by 10:00PM, but no later than 11:00PM; then start it over the next day. This lasts for six days.

That’s what it takes to bring one of, if not the best fishing shows on television to The Outdoor Channel. We all go through it. Producers, anglers, photographers, boat officials, staff – everyone.

Basically, I would be dead at the end of the week. I would not only be exhausted, but I would be in pain. Everything from my back to my neck, my shoulders and I would be cramping in my legs and have headaches.

I found out why this week – I was dehydrating myself every day, but worse on event days.

In the past, I would drink two 32 ounce glasses of water the night before I went out on the water, then drink one in the morning and drink a couple of bottles of water during the day, perhaps an electrolyte drink, and have a diet soda when I ate lunch. I was creating a situation where my body was starved for liquid, and I paid a price for it later.

This January, my wife and I started a new eating plan through our church. We discovered a new to us diet called Body 4 Believers. I won’t bore you with all of the details, but one major one is to drink plenty of water to flush the system and help keep the lever clean and running smoothly.

The founder of the plan instructed us on the first night of a four night class that it was important to drink the right amount of water; not beverages – water. The right amount of water is figured out by dividing the total body weight by two to come up with the number of ounces you’d need to drink each day. One adjustment is that if the total divided out to more than 128 ounces, then all that is required to drink was the gallon of water a day to efficiently operate the body’s systems and keep it hydrated.

That is if we are just sitting at a desk. If we are active, or the environmental conditions are extreme; as they are this week in Tennessee; we need more. The temperatures here are hot, in the upper 80’s and humid, which creates a real feel somewhere in the mid to upper 90’s. 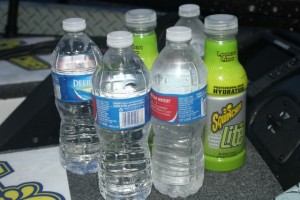 Knowing that I was going to be sweating profusely in the sun all day, I started the day before the event by adding a couple extra bottles of water to my gallon. Then I would drink two bottles in the morning before I even got out the door to get in the truck to head to the lake. Then, on the water during the event, I would drink at least ten more. That brought me to over 200 ounces of water each day. WATER – Not fluid.

I was having my latte in the morning, but that does not add to the hydration of my cells, in fact, it actually can take away from it with the caffeine. But then, I discovered that Major League Fishing’s newest sponsor Sqwincher Professional Grade Hydration makes a version called Zero; which has no sugar, so I can drink it on my diet. Sqwincher claims to have increased levels of potassium, and lower sodium, so it is better for hydration. I added one bottle of that each day to my plan, and have felt the best I ever have covering an event.

At the end of the fourth day of competition, I started thinking about how much better I felt. I was still exhausted, but my muscles didn’t ache, and I didn’t have cramps that woke me up at night and I have yet to have a headache. Then my mind leapt back to what Ken Hoover, the founder of Athletes Outdoors and Eat2Compete; a company which feeds and hydrates Elite Series pros and elite athletes has told me in the past. “The first thing that begins to suffer is your mental acuity when you don’t hydrate properly, then everything else starts to go.”

I guess I should have taken to time to listen to Ken much more closely in the past, I could have saved myself a lot of pain, and potentially worse in the long run.

I specifically try not to write a lot of first person stories on AdvancedAngler.com, but perhaps this one is something that will help all of you properly care for your body while you’re fishing. Not only will you feel better, but then you also give yourself the chance to fish better too, and that’s what this site is all about after all.