Fishing and Music with Bill

by Rob Lever
Editor’s Note – About a year ago, I met a new friend when I was at The Bass University’s Worcester, Mass. event, his name is Rob Lever. Lever picked me up at Boston’s Logan Airport and we hit it off instantly. I asked him where Fenway Park was in relation to the airport.
When he told me that we were driving right by Fenway, I asked him if we had time that we could stop so that I could walk around the park. I explained to him that my dad was born and raised in Salem, N.H. and was one of those typical, “afflicted Boston Red Sox fans” and that I would love to experience part of my dad’s heart for the Sox. 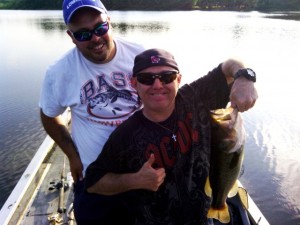 I told him about watching the 2004 World Series with my dad as the final out was recorded and seeing my dad throw his hands up in the air with tears in his eyes exclaim “that’s for Grampa O’Sullivan!” My grandfather was another in a long line of afflicted Irish Red Sox fans. In fact, he was so intense about his Sox, that when he had heart problems at one point during the season, part of his doctor’s prescription was “no more Red Sox games for a while.” I’ll have to admit that I got choked up telling Lever the stories, and a few times while walking around the outside of the stadium.

Lever, a former soldier, just smiled, and later explained that he himself was a tortured Boston sports fan. His heart was evident that day, and every time I have spoken to him since. It was that heart that led him to start his foundation, We Love to Fish, an organization designed to share the love of fishing with special needs people.

Below are the memories of one of those outings.

Now that the holidays are over and the New Year is here, it is a perfect time to do a little clean up around the office. This is not just a cleanup of things around the room, but also a cleanup of my thoughts on the year. This past year has been filled with amazing memories of trips taken. Each of these trips has proven to be rewarding and have provided new learning experiences.

As I was clearing my desk I noticed a picture under a stack of papers. It was a picture of my day with Bill.

Every day when I walk through the building where I work I see Bill. Each day I would say hello and he would nod at me. Through our interaction I noticed how eager he is to work hard and make an impact around his building. Another reason Bill stands out is because he always wears concert t-shirts. Each day brings a new shirt from almost every band I’ve grown up listening to. This made it a no brainer to bring him out for a day. It seemed on the outside that we had so much in common.

The day of our trip came and I spent the morning trying to learn a little sign language. The goal was to make my guest feel comfortable during our day. We launched and had lines in shortly after. I thought this would be a great time to use what I had learned in the morning. Once I got his attention I signed a welcome for him. He looked very puzzled at first and then started to laugh. The aide that came on the trip told me that Bill doesn’t sign, but not to worry because he can read lips.

After the embarrassment of my botched attempt to sign, I again got his attention. This time I simply asked how his day was. He gave me the thumbs up, and then proceeded to catch the first fish of the day. Once the fish was in the boat I decided to put the radio on. After a couple songs I noticed Bill moving to the music. That was when I realized that just because he was deaf, didn’t mean he couldn’t hear the music.

For the next four hours Bill put fish after fish in the boat. Bill was so in tune as to what was going on that 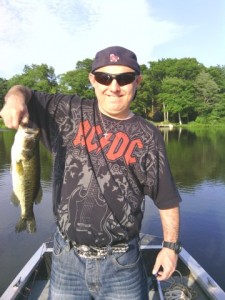 he knew when the strike was going to happen. Before each bite he would stand up and start going crazy. A couple seconds later you would see his rod load and the fight would be on!

After our day was over we headed back to the ramp and said our goodbyes. I realized that after I relaxed and stopped worrying about communicating, our day turned into something special. The afternoon was filled with fish, music, and friends. Most of the bonds I form on my trips are from the fish; this bond was formed from the music.

Looking at that picture made me realize that sometimes words are not the only way people communicate.

In the end, it was our shared love of music, first indicated by his collection of T-shirts, and then by the music on the boat, that formed our bond, no words were necessary.

For more information on my trips, please visitwww.welovetofish.org.