While we were at The Bass University session at Frankfort, Kent. a little more than a week ago, we met a sophomore from The University of Kentucky fishing team named Ryan Collins.

Collins was our ride from the airport to the site, and we got the chance to talk to him. We found out that he is the president of the team at UK, and that he has plans on trying to become a professional angler, his studies, and time on the fishing team at UK are all a part of his plan.

We decided to give Collins a column here on Advanced angler, and from time-to-time, he will share some of his experiences in hopes of helping us all understand a bit more about the college fishing scene; the column will be called Higher Learning.

Below is his first entry. 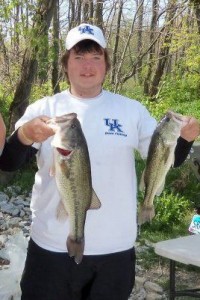 Fishing always has been a part of my life for as long as I can remember. Ever since I was a little kid I found myself holding a rod and reel, whether it was deep sea fishing down in Florida or fishing the bank on the river I grew up on, fishing had always been a major priority in my young childhood.

I was first introduced into the competitive side of bass fishing when I was fifteen years old. A good friend of my father had been fishing local tournaments for a long time and I was honored the first time he asked me to fish with him in one of his tournaments. We ended up placing third in that tournament and from that point on I knew that I wanted to become a professional bass fisherman. We ended up fishing almost every tournament together and now find ourselves competing against each other in Bass Fishing League tournaments and Bassmaster Weekend series tournaments.

Towards the end of my high school years, college fishing had really begun to explode in the fishing community. I knew I wanted to compete at the college level so I made sure to choose a school that had a well established fishing team. I chose the University of Kentucky.

The University of Kentucky Bass Fishing Team was one of the first college fishing teams established and with great history such as current Bassmaster Elite Series Rookie of the Year Brandon Card as part of our alumni, I knew it would be a great fit. My freshman year on the University of Kentucky Bass Fishing Team gave me much needed experience as well as some tremendous opportunities.

In the fall of my freshman year I found myself competing on completely new bodies of water which were like nothing I had ever seen before. Lakes where bluff walls played a major factor in our tournaments were foreign to me, I was so accustomed to shallow water where flipping and pitching laydowns were key to success, not eighty feet of water ten feet off the bank.

I ended up placing seventh in our teams’ angler of the year standings, missing our tournament trail team by a mere two points.

Although I did not make our tournament trail team my freshman year proved to be very important to become the angler I have become. I ended up having the opportunity to fish many famous bass lakes such as Table Rock, Kentucky Lake, St. Clair, Dale Hollow, and Pickwick.

I also got to compete in much larger tournaments than what I was used to, I competed in the Boat U.S. College Fishing National Championship on Pickwick Lake in mid May, that tournament was one of the best times of my life.
On top of fishing some of the top lakes in the Midwest I learned countless tips, tricks, and techniques from other anglers that I met on the way, all of which have led me to who I am now.

At present, I am halfway through my sophomore year here at the University of Kentucky and I have become the President of our fishing team. I have been President for nearly six months now and it is one of the most significant things that has happened to me in my young career, I have learned so much more about the business side of the industry, which I feel is pivotal in this day of age.

Our fall have tournaments have concluded where I ended up placing first in our team’s angler of the year standings so I will be leading our tournament trail team this 2012-2013 season. The season is officially underway and in just these short few months I have found myself competing on Lake Chickamauga where I placed third and Barren River Lake where I took second.

In the next couple of months I will be competing on some of the country’s best lakes, I will be travelling to Kentucky Lake, Lake of the Ozarks, Santee Cooper, and Pickwick Lake to name a few. 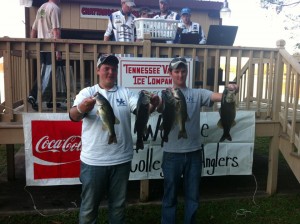 anglers to really expand their fishing by traveling to so many well-known bodies of water. I would have never been able to fish such great lakes if I never joined the UK college fishing team. The opportunity to compete on new water is one of the most educational aspects of tournament fishing, being able to break down and interpret new water is one of the hardest things to do in competitive fishing and college fishing gives us the ability to do so at a young age.

Being able to locate fish on a new lake in a limited time frame is such a difficult task to do; having the chance to do so in college fishing is one of the most educational things I have experienced in my short two years here.

In future articles I will be explaining just how college fishing works, how it prepares anglers for the business side of the industry, what all college fishing has to offer, and much more. I would strongly encourage any young angler out there whether in high school or currently in college to look into joining a college fishing team, there is so much to learn and college fishing is a great stepping stone in your career.