GUNTERSVILLE, Ala. – Dean Rojas, one of the country’s top competitive anglers and arguably the industry’s No. 1 frog fisherman, has joined Duckett Fishing’s professional staff.

Duckett Fishing president and CEO Boyd Duckett announced today that Rojas will work on the design of at least three signature rods: heavy-action and standard-action frog rods, as well as a cranking rod.

Rojas will also serve as a consultant on the development of Duckett Fishing reels, which could be introduced as early as this spring.

We are tremendously happy to bring Dean Rojas on board at Duckett Fishing. As a competitive angler, his amazing records speaks for itself. But even more important to us, Dean embodies the highest level of integrity, said Duckett. 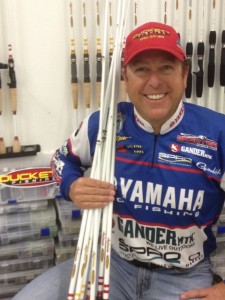 Dean has a tremendous dedication to our industry. While everyone recognizes him as one of the best anglers in the world, we’re actually more interested in his off-the-water abilities and his character,” Duckett said. “Dean will work hand-in-hand with us in the development of new projects. And if you know Dean, you know that he’ll help us create a perfect frog rod.

What is really exciting for us is that Dean had an opportunity to go anywhere he wanted, and he chose to work with us because he believes in what we’re doing, Duckett said.

Rojas said that Duckett Fishing’s “desire for perfection is what attracted him to the company.

I’m very happy to be part of Duckett Fishing, because it’s a company that is aggressive and does things the right way, Rojas said.

People throughout our industry understand that Boyd is a leader and an innovator,” Rojas said. “And what really attracted me to Duckett Fishing is knowing that Boyd is going to work and work to perfect whatever the company is developing. And Duckett Fishing won’t put a product out there until it’s right. That’s what I was looking for.”