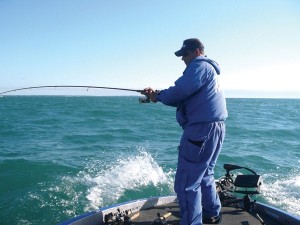 Unless you live in Florida, Texas, or California, January is one of the slowest times of the year in bass fishing. Not only is much of the country ice covered, but there aren’t a lot of major tournaments, and it is another six months before ICAST brings us any exciting new products. In short, it’s pretty dead out there.

While researching story ideas for the technique piece destined for this January newsletter, I called FLW pro and Beaver Lake stud Greg Bohannan to see how he catches them in January. Luckily, I caught the amicable Arkansas pro while he was out on the water fun fishing on Beaver.

After letting him know about my efforts to find a good topic for the January Denali Rods newsletter, he quickly mentioned that because the waters in the Ozarks had been so cold lately, he had been forced to reconnect with an old standby, swimming a grub. Bingo; I had my story, and commenced with an on-the-water interview.

Why are the details of this interview important you may ask? Because in between questions about rod specifications, and reeling cadence, Bohannan grunted, then said “There’s a fish right now”, as he set the hook.

After about half a minute on the phone with me trying to decide whether it was a bass or a walleye, I heard him gasp and say “I’ve gotta put you on speaker, this is a giant largemouth.” 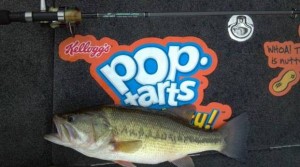 Through my expert coaching (ha), Bohannan landed the six pound class fish shown, slapped it in the livewell for later photos, and continued right along with the interview. What a pro!

The importance of this single fish catch should not be lost on all prospective winter bassers. Bohannan caught a six pound fish at midday in 42 degree water on a lake notorious for its stinginess, by swimming a grub.

It’s pretty hard to come up with a bait that has been around longer without any significant changes than the plastic grub. The Lindner’s, Bill Dance, and Babe Winkleman were throwing Mr. Twisters and Bobby Garland’s grubs way back in the 70’s, and catching big stringers of bass doing it.

Since then, the technique has seen a slow decline to the point where outside of a few dedicated, it is only ever discussed when the bottom drops out of the mercury. Occasions like that have been pretty common this winter, and that’s exactly when Bohannan turns back the clock and rigs up a grub.

“I generally like to fish a little different in the winter.” Bohannan says, continuing “Cranking a wart or throwing a jerkbait or Alabama rig are much more my style, and those presentations are often dynamite in the winter. When it gets really cold though, there is nothing that catches them like slow swimming a little grub around.”

The reason that Bohannan thinks a single tail grub is so effective in the winter time is because it provides a really subtle vibration, something important to inactive winter fish. “The colder the water gets, the less action you want to have on your baits. Nothing in the water is moving that aggressively when the water gets below the low 40s, so a grub looks really natural to the fish.”

Find the Trees
Bohannan thinks the number one key to catching fish when it’s really cold is to find vertical structure. Things like standing pole timber, bluff banks, and big rocks are all places fish stack up on once the temperature plummets, saying “The fish get really lethargic once the water temperature gets into the low 40’s, and vertical structure allows them the most bang for their buck when it comes to feeding efficiency. They can be comfortable out deep, and then come up 20 feet to eat a dying shad with just a couple of tail kicks.”

Bohannan idles long stretches of timber or bluff bank while using his side and down imaging systems to locate the depth that the fish are holding in the cover. “I’ll look for fish at a certain depth before I start fishing. That gives you an idea of how long to count the grub down before you start reeling.”

The lakes of the Ozarks region are perfect case studies in abundance of grub-friendly cover, as they contain miles of bluff walls, and acres of flooded timber. That doesn’t mean the Ozarks are the only places swimming a grub works though. Bohannan says that vertical structure is all relative. “Just because you don’t have bluffs or standing timber in your home lake doesn’t mean that you can’t catch them swimming a grub in the winter. You just need to find what is vertical for your lake. Some places to look might be boat dock posts, bridge pilings, or rip rap. The fish are just going to use what is available to them.” 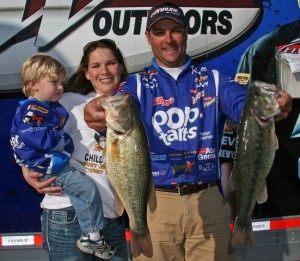 Slow and Steady
Once Bohannan locates some fish on his electronics, he notes how deep they are, backs off, and makes a long cast to the structure. He then counts the bait down to the desired depth. “I’ve noticed over the years that for some reason, fish usually hang around 12-15 feet down near a timber line or bluff wall. I’ll usually count the jig down 10 to 12 seconds, and then start slowly reeling it in.”

It’s pretty self-explanatory after that, reel it in at a pace just fast enough to keep the tail fluttering. Bohannan’s only caution is to make extra sure to keep the retrieve slow. “It’s cold out there, so you need to continually remind yourself to slow down and keep the bait in the strike zone.”

If Bohannan isn’t seeing the fish on his locator, or he is familiar with the lake, he mentions that it often pays to experiment with different depths, especially as the weather changes. “I might be making a 10 count on a sunny day, but need to switch to a 20 count when it’s cloudy and especially cold.”

Rig it Right
Bohannan’s grub swimming setup is pretty straightforward. He relies on a 7″ Denali Jadewood Shakeyhead rod paired to an Ardent 200 spinning reel. He spools the reel with 6lb Toray BAWO Superhard Polyamide Plus, a high performance co-polymer, saying “I really like to use mono in the colder weather. It is easy to handle in the cold and the stretch makes fighting a big fish on light line a lot easier.”

As far as grubs go, Bohannan isn’t too particular. He uses a 5″ Kalins model most of the time. For colors, he also keeps it pretty simple, using natural colors in shad patterns or smoke. He threads the grub onto a ¼ or 3/8 ounce regular round ball-head jig with a weedguard. He uses the ¼ ounce most of the time, unless he is fishing the grub deeper than 15 feet or wants it to stay down longer. “The weedguard is important though, because you are often swimming the grub around timber or big rocks. Nobody likes to re-tie when it’s freezing outside, and a weedguard will reduce the number of snags you encounter.”

Stay Warm
Aside from the obvious requirement of open water (anglers north of about mid-Iowa, do not apply), Bohannan advises that there are some other things you need to consider when fishing in really cold conditions. “The first one is to always wear your personal flotation device, even consider wearing it when fishing if the conditions are rough. A fall into 40 degree water is a lot more dangerous than it is in the summer time. Secondly, make sure you wear the proper clothing, including gloves and warm footwear. If you’re freezing out there, you won’t enjoy it as much and you’re more likely to lose patience and fish too fast.”

As long as you prepare correctly, fishing when the water temp gets into the low 40s or below can be a very fruitful endeavor. Bohannan has caught many big stringers of bass swimming a grub in the cold water, saying “It’s not something I always did a lot of, but in the last several years I’ve really enjoyed fishing in the winter. You can catch some of the best fish of the year, and you’ve often got the lake to yourself. Swimming a grub is a great way to build some winter confidence and break out of the cabin fever.”