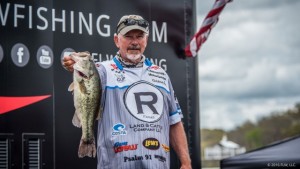 ROGERS, Ark. (April 15, 2016) – Last year when the FLW Tour visited Beaver Lake, Oklahoma pro Darrel Robertson was in second place as the tournament progressed into the third day of competition. Robertson struggled on day three and didn’t advance to championship Sunday. Friday, at the Walmart FLW Tour at Beaver Lake presented by Jack Link’s, Robertson earned a shot at redemption.

After catching 14 pounds, 14 ounces Thursday, good for 12th place, Robertson added four largemouth and one spotted bass weighing 16-4 Friday and vaulted into the lead with a two-day total of 31-2.

The field is now cut to 20 as the tournament heads into day three of the four-day event that featured 166 of the best bass-fishing anglers in the world competing for a top cash award of up to $125,000.

“I felt like I had a little bit better of a day yesterday because the quality of my fish were better, but today I caught two big ones,” said Robertson, who won the world championship of bass fishing, the Forrest Wood Cup, in 1999. “One was a 5½-, one was a 4½- and the rest were 2-pounders. Yesterday, I weighed in 14-14 and they were all alike.

“The Good Lord has blessed me, though,” Robertson continued. “I’ve had bites that I probably should not have caught – the 5½-pounder today came out of a bunch of trees, on very light line. I have a plan for tomorrow and I’m confident that I can go out and catch 8 or 10 pounds. If I could have done that last year, I would have been fishing on that fourth and final day.”

Robertson said that he was fishing slow, throwing a Yamamoto Senko worm.

“I have two areas that I have been fishing. I caught three bass yesterday out of some muddy water, but when I pulled in there today there was 20 boats already in there. I left and decided to fish the clear water and that is where I caught all of my fish today. The area isn’t very big, but there are a lot of fish there. I’ll be ready to go tomorrow.”

Robertson earned the Big Bass Award on the pro side Friday, weighing a 5-pound, 8-ounce largemouth to win the $500 prize.

Anglers will take off from the Prairie Creek Park Marina located at 9300 N. Park Road in Rogers at 6:30 a.m. each day of competition. Saturday and Sunday’s weigh-ins will be held at Walmart, located at 2110 W. Walnut St., in Rogers beginning at 4 p.m.

Also for youth, the FLW Foundation’s Unified Fishing Derby will be held at the Arkansas Game and Fish Commission (AGFC) Bentonville Community Lake, located at 2805 West Oak St., in Rogers on Saturday, April 16, from 9-11 a.m. The event is hosted by FLW Foundation pro Cody Kelley along with other FLW Tour anglers, and is free and open to area youth 15 years of age and younger and Special Olympics athletes. Rods and reels are available for use, but youth are encouraged to bring their own if they own one. All bait is provided by the DMF Bait Company.

The Walmart FLW Tour at Beaver Lake presented by Jack Link’s is being hosted by Visit Rogers.