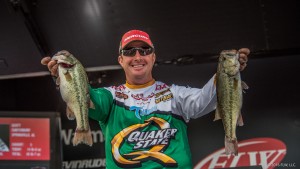 ROGERS, Ark. (April 16, 2016) – The Walmart FLW Tour at Beaver Lake presented by Jack Link’s is setting up for a dramatic final day on Sunday – all of the anglers that made the top-10 cut are in striking distance and have a legitimate shot to win the tournament, and the top prize of $125,000.

Quaker State pro Scott Canterbury of Springville, Alabama, who started the day in second place, weighed a five-bass limit totaling 14 pounds, 6 ounces to take the lead with a three-day total of 45-7.

With just 4-15 separating leader Canterbury from 10th place angler Andrew Upshaw (40-8) the tournament is still very much up for grabs.

“I’m excited, but I know that it’s not like I’ve got this tournament in the bag,” said Canterbury, who is seeking the first FLW Tour win of his career after six previous second- or third-place finishes. “I’ve got the best in the world right behind me – ‘Mr. Beaver Lake’ Matt Arey, the G.O.A.T. Andy Morgan right on my tail, and Jeff Sprague has caught them every day. I’m going to have to go out and catch five good ones tomorrow.

“I only caught 14 pounds today and if I do that tomorrow, I won’t win,” Canterbury continued. “I have to catch at least 15 pounds, otherwise I won’t have a shot at this. This lake is as healthy as it has ever been and is fishing really good.”

Canterbury said that he has caught all of his fish this week pitching a jig, and he is catching 8 or 9 keepers each day. He has been running mostly new water throughout the tournament, returning only to a few choice locations.

“I’ve been to this lake so many times that I just know little stretches that I like to fish. I’ve been fishing down almost to the dam and I’ve been up the White River and all over this place. Four of the five fish that I weighed in today came in places that I hadn’t fished before. I have caught a fish every day off of one rock, and I caught a 3-pounder there today, so I’m going back to it but other than that I’m not repeating a lot.

“I don’t know yet what I’m going to do tomorrow,” Canterbury went on to say. “At Beaver Lake, you have to fish the conditions each day. I’ve been in this spot before and I know how quickly this lake can change. I’m just going to go fishing and try to have some fun.”

Overall there were 98 bass weighing 247 pounds, 5 ounces caught by pros Saturday. Eighteen of the final 20 pros weighed in five-bass limits.

Anglers will take off from the Prairie Creek Park Marina located at 9300 N. Park Road in Rogers at 6:30 a.m. Sunday, the final day of competition. Sunday’s final weigh-in will be held at Walmart, located at 2110 W. Walnut St., in Rogers beginning at 4 p.m.

Fans will also be treated to the FLW Expo on Sunday from noon to 4 p.m. at Walmart prior to the final weigh-ins. The Expo includes a 100-yard Lew’s Casting Lane, the opportunity to interact with professional anglers, enjoy interactive games, activities and giveaways provided by FLW sponsors, and learn more about the sport of fishing and other outdoor activities. All activities are free and open to the public.

The Walmart FLW Tour at Beaver Lake presented by Jack Link’s is hosted by Visit Rogers.