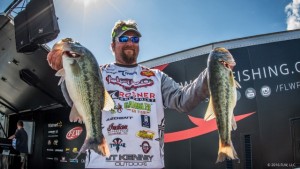 ROGERS, Ark. (April 14, 2016) – For years Beaver Lake has seemed to have pro angler J.T. Kenney’s number. In his previous 13 visits to the northwest Arkansas fishery, Kenney has averaged a finish of 85th place and finished in the money just three times. This week at the Walmart FLW Tour at Beaver Lake presented by Jack Link’s, Kenney’s luck could be turning.

Kenney, of Palm Bay, Florida, caught five largemouth that weighed 18 pounds, 5 ounces to take the lead on day one, ahead of legendary Quaker State pro Jimmy Houston of Cookson, Oklahoma, (17-13) in second place and third-place angler Kurt Mitchell of Milford, Delaware, (17-8) in the four-day event that features 166 of the top bass-fishing anglers in the world competing for a top cash award of up to $125,000.

“I’ve always struggled at Beaver Lake, so this past season I’ve really been trying to learn from (Bryan) Thrift and (Andy) Morgan and the other guys that always seem to do well here,” said Kenney, an eight-time Forrest Wood Cup qualifier. “Every place that I caught them in practice, I purposely avoided today – I fished all new water. The areas that I fished all looked very similar, but this lake changes every day and I’m going to keep moving. ”

Kenney’s stringer was anchored by a 6-pound, 10-ounce largemouth – the second largest bass ever weighed at Beaver Lake in FLW Tour competition.

“I caught the big one early, like 20 to 30 minutes after takeoff,” Kenney said. “I don’t want to name the specific bait yet, but I caught all of my fish today cranking a 6th Sense Lures crankbait. I didn’t catch a whole lot – only 10 all day – but I had a couple of decent ones.”

On a day when many competitors brought in mixed limits of largemouth, smallmouth, spotted and meanmouth bass, Kenney’s limit consisted of five largemouth.

“I knew when I saw the color of the water this week what areas I wanted to fish,” Kenney said. “I didn’t think that I could catch 18 pounds, but I really wouldn’t have if I didn’t have the big 6-pounder. I’m going to keep running new water and not going to fish any place tomorrow that I did today. I know how quickly this lake likes to change, so I’m just going to take it one day at a time.”

Kenney’s huge 6-pound, 10 ounce largemouth earned the Big Bass Award on the pro side Thursday and the $500 prize.

The top 10 co-anglers after day one on Beaver Lake are:

Jason Gibson of Byrdstown, Tennessee earned the Big Bass Award on the co-angler side Thursday with a bass weighing 5 pounds, 3 ounces to win the $250 prize.

Also for youth, the FLW Foundation’s Unified Fishing Derby will be held at the Arkansas Game and Fish Commission (AGFC) Bentonville Community Lake, located at 2805 West Oak St., in Rogers on Saturday, April 16, from 9-11 a.m. The event is hosted by FLW Foundation pro Cody Kelley along with other FLW Tour anglers, and is free and open to area youth 15 years of age and younger and Special Olympics athletes. Rods and reels are available for use, but youth are encouraged to bring their own if they own one. All bait is provided by the DMF Bait Company.

The Walmart FLW Tour at Beaver Lake presented by Jack Link’s is being hosted by Visit Rogers.