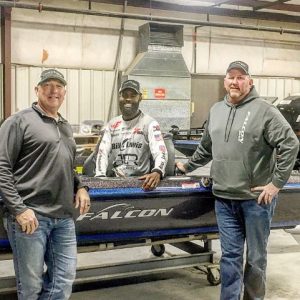 Newberry, S.C. – November 23, 2017 – Falcon Boats continues to build upon their momentum, and the latest news out of the Newberry, S.C. company is the addition of Belton, S.C. FLW Tour pro Brian Latimer to their National Pro Staff that includes FLW Tour pro Anthony Gagliardi and Bassmaster Opens pro Michael Murphy.

The addition of Latimer provides the company with not only one of the true, up and coming anglers on tour, but it also means that the company will receive the benefits of Latimer being one of the hardest working anglers in the business.  Aside from his fishing record; which includes eight top 10 finishes and one win in FLW Tour completion, and a top ten in Bassmaster pro tournaments, Latimer has also developed a strong following in social media circles with his tireless and innovative work in that arena.

It was the whole package that Latimer presented which caught the eye of the Falcon Boats family.  “We’ve had our eye on Brian for a while now,” said Falcon Boats’ President Stephen Waller.  “He is a South Carolinian, which provides its benefits to us, and has been showing what he is capable on the water.  He is also a very active promoter of his partners, and that complete package made him someone we wanted to work with.”

Latimer is the son of a local tournament fisherman, and that helped make the decision easy for Falcon Boats.  “Brian comes from a fishing family, and having grown up in the sport, he understands how to play the game,” said Waller.  “He brought his dad with him to meet us, and seeing how much family meant to him, it made a big impression on us.  As a growing company, we view ourselves as a family, and we are truly excited to have someone of Brian’s skillsets, history and potential joining our family.”

Latimer said that making the move to Falcon Boats made sense for him on a lot of levels, but it was the feeling he got from the company that helped him make his final decision to join the Falcon Boats team.  “I had kept my eye on the brand since their early days because they were a South Carolina company, and I really liked the look of the boats,” he said.  “After seeing the production process and driving the boats, I knew the product was top notch.  However, as good as the product is, Stephen, Tim and their team really made me feel comfortable, and made the decision a lot easier.”

He also said that he knew the boat was going to help him do his job on the water much easier.  “The construction of the Falcon lineup is such that it makes for the best ride I’ve ever been in, and that will help me get where I need to go more comfortably; which will help me fish better,” he said.  “Not only will that, but the layout and design of the boat simplify my life as well.  They have thought this boat out so thoroughly, from the storage, to the width, to the deck layout and even the ease of accessibility to the rigging areas of the boat; they improved on everything we have known.

He said the boat will make his life more efficient.  “I can fish hard and should I need to adjust anything while on the water; I can do it quickly and easily,” he said.  That kind of forethought makes my job as a tournament angler and a guide easier; I am thrilled to be joining the Falcon Boats family.”

Latimer will be driving the Falcon F205 powered by a Mercury 250 Verado while competing on the 2018 FLW Tour Schedule.

About Brian Latimer – Brian Latimer is a professional fisherman from Belton, South Carolina.  Having picked up a love for the sport of bass fishing from his father, Latimer spent his youth and teenage years fishing that resulted in a true passion for the sport that has carried into his adult life.  After working his way through the grass roots levels of bass fishing Latimer made the leap to Tour level competition in 2016 when he joined the FLW Tour.  In his career, as a professional angler, he has built an impressive list of accomplishments that include one win and nine top ten finishes.  Along with Falcon Boats, Latimer represents the following companies; Bill Lewis Lures (Rat-L-Trap), ZMan Fishing, Stanley PMI, GreenPond Landing and Event Center, T-H Marine, Mustang Survival, Favorite Fishing, Power Pole, Mercury Marine, Lowrance, Seaguar Fishing Lines, Abu Garcia and Owner Hooks; He is active on social media platforms and can be found on InstaGram @brian_latimer, Facebook @brianlatimerfishing and YouTube

About Falcon Boats – Falcon boats; established in 2015, currently produces two bass boat models, the F205 and F215, with a third, the F195 in the final stages of development.  The boats are designed with a triple main beam stringer grid and a 99” beam to provide increased stability and an improved ride on rough waters.

A product of a lifetime of boat building, Falcon Boats was created with the goal to provide a premium quality, high performing, tournament worthy boat at an affordable price.  The company’s founders have over 90 years of combined boat manufacturing experience.  Their vast boat building experience in both the freshwater and saltwater industries are combined to build an exceptional boat for fishability and serviceability. This experience, along with a passion for fishing, provides a wealth of knowledge on what goes into making the best fishing boat.

The Falcon manufacturing facility is in Newberry, South Carolina. Visit them on the web at http://www.falconbassboats.com or contact them at 803-276-0033 for questions or dealer inquiries.