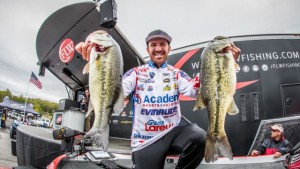 ROGERS, Ark. (April 23, 2015) – A cold and blustery morning greeted anglers this morning for the start of the Walmart FLW Tour at Beaver Lake presented by Rayovac. After the field of 154 anglers had crossed the weigh-in stage, pro Jacob Wheeler of Indianapolis, Indiana, stood alone atop the leaderboard after bringing a five-bass limit to the scale weighing 15 pounds, 14 ounces. Wheeler will begin day two with a slim 5-ounce lead in the four-day event, hosted by the Rogers Convention and Visitors Bureau, that features the best bass-fishing anglers in the world competing for a top cash award of up to $125,000.

“I went out with a game plan today and stuck with it,” said Wheeler, the 2012 Forrest Wood Cup Champion. “I caught a couple of key fish and really just had the right bites today. I got lucky with a nice 4-pounder, and that was the difference maker for me.”

Wheeler said that he caught eight keepers throughout the day on four different baits. He said three of his fish were caught by sight-fishing, including the 4-pounder.

“The fish that are on the beds here are very moody. One day they’re ready to bite, and then the next day they are not. I have five or six more fish that I think are 3½- to 4-pounders marked, so if I can catch them throughout the next few days I should be able to weigh a good bag.

“I’m fishing a 20-mile stretch of the lake and I’m running to a lot of different spots,” Wheeler continued. “I’m trying to keep my options open and just fish the conditions. Tomorrow is just another day. Hopefully I can catch a few more that keep me near the top of the leaderboard and in contention.”

Cobb won the Bridgford Big Bass Award on the pro side Thursday with a bass weighing 5 pounds, 5 ounces to win the $500 prize.

The top 10 co-anglers on Beaver Lake are:

Anglers will take off from the Prairie Creek Park Marina located at 9300 N. Park Road in Rogers at 6:30 a.m. each day of competition. Friday’s weigh-in will be held at Prairie Creek Park beginning at 3 p.m. Saturday and Sunday’s final weigh-ins will be held at the John Q. Hammons Center, located at 3303 Pinnacle Hills Parkway in Rogers beginning at 4 p.m.

Fans will also be treated to the FLW Expo on Saturday and Sunday from noon to 4 p.m. at the John Q. Hammons Center prior to the final weigh-ins. The Expo includes a Ranger boat simulator, the opportunity to interact with professional anglers, enjoy interactive games, activities and giveaways provided by sponsors, and learn more about the sport of fishing and other outdoor activities. All activities are free and open to the public. Also on Sunday, country music artists Backroad Anthem will perform a free live concert on the Walmart weigh-in stage at 3 p.m. Pros Rich Dalbey and Todd Hollowell’s “Hooked on Helping” foundation will also be hosting a food drive to benefit the Northwest Arkansas Food Bank. FLW fans who donate five or more cans of food will be entered to win a $50 Walmart gift card.