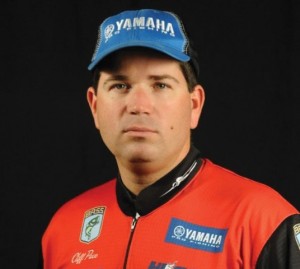 SPRINGFIELD, Mo. (Feb. 16, 2015) – Bassmaster Elite Series angler Cliff Pace of Petal, Miss., is the newest member of the Team Lew’s pro staff. Lew’s officials made the announcement today, citing this week’s 2015 Bassmaster Classic on South Carolina’s Lake Hartwell as the perfect opportunity to celebrate the addition of Pace who joins several other Lew’s anglers who qualified for the event.

Pace, 34, won the 2013 Bassmaster Classic held on Oklahoma’s Grand Lake O’ the Cherokees. His automatic berth into the 2014 Classic was deferred by B.A.S.S. officials to the 2015 championship when Pace’s injuries from a deer stand accident in late 2013 prevented his participation in last year’s Classic.

Over the past dozen years in B.A.S.S. competitions alone, Pace has won two Opens and finished in the Top 10 of 23 events other than his wins. He has earned nearly $1.4 million in tournament payouts.

“Cliff finishes every tournament just like he starts it, working hard and making necessary adjustments right up until the last cast. He epitomizes what the Lew’s brand is all about in delivering a reliable, consistent performance day in and day out,” said Lew’s CEO Lynn Reeves. “Cliff is a strong addition to our team and we’re proud to welcome him aboard.”

The Hartwell event will be Pace’s sixth Classic appearance. In it he joins four other Team Lew’s anglers: Stephen Browning, Jason Christie, Mark Davis and Kevin Short. Davis is also a previous Classic winner, as he won the 1995 title at North Carolina’s High Rock Lake.

There are also other anglers with Lew’s ties fishing in the 2015 Classic, including Troy Diede, Bill Lowen, Paul Moeller and Van Soles.

“We know that tournament anglers have many options when selecting their fishing equipment so it makes us especially proud when they choose Lew’s,” Reeves added. “Bassmaster Classic week is a special time and place for anglers and fans. We invite everyone to stop by the Lew’s booth at the TD Convention Center this week in Greenville (S.C.) to talk fishing, learn more about our products and meet some of our other pros, including David Fritts, Tim Horton and Hank Parker.”