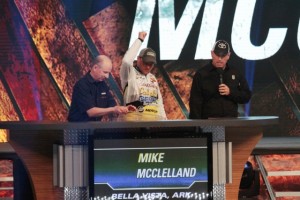 As soon as he qualified for the 2013 Bassmaster Classic, Belle Vista, Ark. pro Mike McClelland became an instant favorite amongst fans and media for the win. The fact that he lives within an hour of the Grand Lake O’ the Cherokees venue and because he had won an elite series event on the lake before made people feel that McClelland could win his first Bassmaster Classic title this at the event.

With much effort in the planning and pre-practicing, McClelland himself felt that Grand Lake gave him his best chance yet to win a Classic and etch his name in bass fishing history. The reason for the confidence was not so much everyone else’s reasons, but more because of his scouting and his skill level with techniques that would likely play a role in the event.
“I didn’t have much experience on Grand this time of the year,” said McClelland. “Most of the time I’ve spent on the lake had been in the post spawn period, which is obviously different, although the fish tend to use similar areas when coming and going to the spawning areas.”

Pre-practice
McClelland spent as much time as he could on the lake up until the off limits period. He said he would often spend a half a day whenever time allowed. “If I had a half of a day available I would go to the lake and scout as many new areas as I could,” he said. “I had done most of my earlier fishing in the mid-lake area so I wanted to scout as many creeks as I could figuring that fish would be in some sort of a pre spawn pattern during the tournament time.”

What that led him to do was begin checking as many creek channels and deep pockets as he could. He said that he used his Lowrance fishing systems to locate areas that held typical pre-spawn areas where bass had access to deep water as well as shallow feeding flats Key to his belief was that the bass would be using some sort of transition area between sizes of rock.
He didn’t really start fishing much until the water temperatures became cold closer to the off limits period. During those trips, he said he experienced some pretty good results, leading him to believe that a jerk bait bite would become key for the event.

Practice
Armed with his research from earlier scouting days, McClelland entered the three day official pre-practice days looking to see where he could best utilize the knowledge he had gained. “The weather had been good and the fish were extremely active, so I was able to do really well on my SPRO McStick 110,” he said. “The first creek I went into didn’t fair so well, but the second creek at the lower end of the lake showed me how catchable the fish were when I caught a nice three pounder in front of another competitor.”

Most of the remaining official pre-practice went much like this, however the snow storm that pounded northeastern Oklahoma dropped water temperatures and made the conditions tougher. Even with that McClelland felt like he had an advantage over other competitors. “I’ve gained so much experience with my McStick that I felt like I could still do really well even with the tougher conditions,” he said. “The other advantage is that I live in the area and I know how to keep myself comfortable in these conditions where other anglers might not have been able to with my layering of SIMMS thermals, and my Mustang Survival Catalyst Flotation Coat and Pants.  I was warm, dry, flexible and safe should I fall in the cold waters.”

Day One
As the conditions from the practice day carried over to the media day on Thursday, the competitors arrived at the lake on day one to find the conditions much different . McClelland said that he started the morning in some of his prime areas hoping to catch one or two quality fish, however, near lunch time he had yet to bag a quality keeper. “I have to admit that the excitement of the situation kind of got to me initially, and I had a little bit of a hard time slowing down,” said McClelland. “I caught three smaller keepers before I really got into my rhythm, and my fourth fish really clued me into what they were doing.”

It was around 11:30 in the morning when McClelland made a cast into the wind and had small overrun in his reel. While he was picking out the loose loops is when he got the key bite. “I reeled up the loose line and when I got about ready to twitch my stickbait, I could tell that the rod was starting to load up, so I set the hook,” he said. “The fish on the other end of the line was a 5-pound, 7-ounce kicker, and I told Robbie Floyd and my marshal that I just figured out what they wanted.”

What the veteran pro had discovered was that he was moving too quickly and not allowing his bait enough time to settle long enough to give the suspended fish a chance to react to it. He would go on to cull several times that afternoon and end up with 17 pounds, 15 ounces, good enough for 9th place.

Day Two
The second competition day would prove to be his worst of the event and would ultimately be what he felt would cost him the chance to win. “I never really found the rhythm on Saturday,” he said. “I ended up moving around too much, probably moving too fast and not giving my bait enough time to suspend and it really made for a slow day.”
McClelland would weigh nine and a half pounds, however it was not even that until moments before it was time to check in. He caught a two and hal 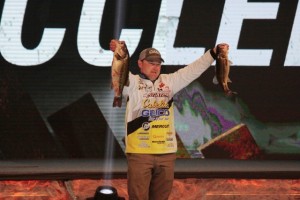 f pounder at the end of the day that culled a fish that was just barely the legal size limit so it bumped his weight from seven pounds to just over nine.

Even with his disappointing day he knew that there was potentials on grand for a twenty five pound limit or more so while it was a long shot he knew there still might be a chance.
He would end the day with 27 pounds, 7 ounces and find himself in 14th place.

Where he had ignored his gut feeling on the second day he began to pay attention again on the final day and listening to his inner voices McClelland found more success. He had a limit by eight thirty and was starting to feel really good, then at ten thirty am while he was explaining to his marshal that bass would suspend in the middle of the creek he made a cast in the direction of the creek channel and caught his biggest bass of the day.

“I started calling shots being able to tell my observers what cast I was going to catch fish on,” he reported. “Everything felt really good and I was making the right moves but by ten thirty I had everything that I weighed in.” He was able to catch more fish but nothing that would increase his weight and he ended the day with a 17-pound, 14-ounce bag; the biggest of the day to move him into fifth place for the tournament.

Regret
McClelland said he would obviously change the second day of the event if he could because he knew that his poor performance on day two ultimately cost him the chance to win the event. He also wished, in hindsight, that he would have gone back through some of the areas he caught quality fish on day three because he might have been able to increase the size of his bag that day as well.

Even with that he felt good about his final day, that he was able to recover enough to finish fifth, though he would have preferred to have quality days on all three days of the event.

Keys
McClelland said there were two keys to finding the better quality fish on Grand. The first was adjustments to his lure and retrieve, the second was the area in which he threw them.
“It was really important for my SPRO McStick to slowly fall in the water, ” he said. “Along with that I had to allow the bait time to slowly sink down towards the fish. I was often pausing the bait fifteen to twenty seconds between twitches, or more.” 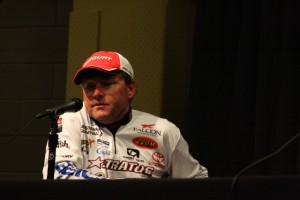 The other key revolved around finding those transition areas near deep water in major creeks. Where he found those, and the presence of bait fish, he found the right kind of bass. “They were either creek channel bends or points with ledges on the side,” said McClelland. “Where those came together with transitions from larger to smaller rock is where I caught them; of course a little bit of wind never hurts either with a McStick.”

Equipment
McClelland said that he threw his jerkbait on his 6’8″ inch signature Falcon McStick rod and he used a Quantum EXO 5.3:1 reel to help him slow down until he found fish and got on rhythm then he would switch to a 6.6:1 EXO. His reels were spooled with primarily 10-pound-test Sunline Reaction FC Fluorocarbon line, but he did use 12-pound-test in some shallower areas.

“The Reaction FC was key because it allowed me to feel more bites, but Sunline engineered it with a little more stretch so I never lost a fish during the event,” said McClelland.
While the bulk of his fish came on the SPRO McStick 110 he did weigh in two of his fish that he caught on brush piles on a 1/2 oz Bass-X Roundball jig in green pumpkin-orange with a green pumpkin Zoom Chunk or Super Chunk Jr. as a trailer.