I got on the water this week with the winner of the Lowrance, Fish with Skeet for a day, contest.

The winner’s name was Scooter Boyette from Louisiana, and he had not been to California before. He didn’t get to see Clear Lake when he arrived because it was after dark by the time he got there.

When he woke up the next morning and stepped outside, he just stood there looking around. Apparently, he hadn’t seen much in the way of hills and mountains and he was really taken aback with the beautiful surroundings of Clear Lake. 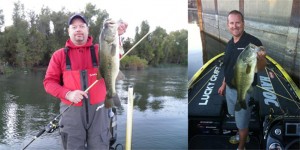 The fishing wasn’t spectacular; Clear Lake is in that funny, summer to fall transition with water temperatures that were around 72 to 73 degrees. They’ve also got weed extraction machines out there cutting up all of the weeds, and the grass clippings are blowing into areas making it harder to fish.

We ended up catching several fish, and we even caught some good ones up to six pounds.

We caught them on the new Lucky Craft LVR TO, and the Lucky Craft Fat Smasher. We threw everything on my 7′ Wright & McGill SGlass cranking rod with a Victory 701 reel and 15-pound-test Berkley 100% Trilene.

I also made a trip to Dick’s Sporting Goods corporate offices. I can’t say that I’ve ever seen a more impressive headquarters than that.

The CEO basically got tired of having to move as the company grew, so they had a new building designed that the company could grow into.

They’ve got basketball courts, and fitness areas, a bank in the building and their own Starbucks Coffee shop there; It was really impressive.

On the home front, Lea started basketball camp this week and when soccer is over, she’ll move right into hoops.

Other than that, not much; oh, while I want to say congratulations to Paul Elias for his win at Guntersville FLW; I’m bummed that he won it on the Alabama Rig. I was hoping to keep that one quiet for a while longer.