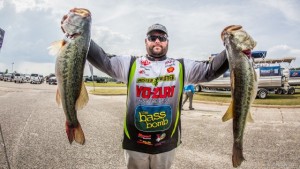 EUFAULA, Ala. (May 14, 2015) – Pro Clent Davis of Montevallo, Alabama, caught five bass weighing 22 pounds, 9 ounces Thursday to grab the lead on day one of the Walmart FLW Tour at Lake Eufaula presented by Quaker State. Just 1 pound, 1 ounce separates the leader from second-place pro Troy Morrow of Eastanollee, Georgia, who caught five bass weighing 21-8 in the nationally televised tournament, hosted by the Eufaula Barbour County Chamber of Commerce, that features 149 anglers competing for a top cash award of up to $125,000.

“I hit around 30 to 40 different spots today and caught eight keepers,” said Davis, a former FLW College Fishing standout from the University of Montevallo in Alabama. “Sometimes, it’s better to be lucky than good. Coming in to the day I thought I would be pretty lucky to catch 12 pounds.

“It’s definitely a numbers game right now,” Davis continued. “I pull up to a spot, make three casts, and if they’re not feeding then I’m heading to my next area. I’ve been fishing here all my life, so I’ve got plenty of spots to hit. I caught one today off of a spot that I had fished six years ago when I was still in college.”

Davis said that it was no real secret what he and the majority of the anglers in the top-10 were doing – targeting suspended fish over brush piles. He used a variety of baits to catch his fish Thursday.

“I was throwing a big swimbait, a big crankbait, a big worm and a big jig,” Davis said. “One fish will want a swimbait and the next fish wants a worm dragging on the bottom. The key seems to be pulling up to the spot at the right time of the day when they are feeding.

“I think that the fish tend to reload here,” Davis went on to say. “I believe that there are more fish heading deeper and they’ll replenish some of the areas that I hit today. I’m just going to go fishing again and we’ll see how it goes tomorrow.”

The top 10 pros after day one on Lake Eufaula are:

Bryan Thrift of Shelby, North Carolina, won the Bridgford Big Bass Award on the pro side Thursday with a bass weighing 7 pounds even to win the $500 prize.

The top 10 co-anglers on Lake Eufaula are:

Self caught Thursday’s Bridgford Big Bass Award in the co-angler division with a bass weighing 4 pounds, 14 ounces to win the $250 prize.

Fans will also be treated to the FLW Expo on Saturday and Sunday from noon to 4 p.m. at Walmart prior to the final weigh-ins. The Expo includes a Ranger boat simulator, the opportunity to interact with professional anglers, enjoy interactive games, activities and giveaways provided by sponsors, and learn more about the sport of fishing and other outdoor activities. All activities are free and open to the public. Pros Rich Dalbey and Todd Hollowell’s “Hooked on Helping” foundation will also be hosting a food drive to benefit the Judson Baptist Association Food Bank. FLW fans who donate five or more cans of food will be entered to win a $50 Walmart gift card.

Coverage of the Lake Eufaula tournament will be broadcast in high-definition (HD) on NBC Sports Network (NBCSN) October 19 from 7 p.m.-8 p.m. ET. when Season 20 of “FLW” returns this fall. The Emmy-nominated “FLW” television show airs on NBCSN, the Pursuit Channel and the World Fishing Network and is broadcast to more than 564 million households worldwide, making it the most widely distributed weekly outdoors-sports television show in the world.