Ken Cook’s Postspawn Tips for May 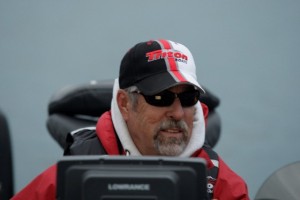 In many portions of bass country – including the North Texas region near where I live – it’s already deep into the month of May as this story is written.

And in most of the southern Great Plains and the Deep South, that means that the annual largemouth bass spawn is winding down as the post-spawn portion of the annual breeding cycle begins to rev up.

But that doesn’t mean that the good fishing for this spring is already over with.

“I’ve always liked May,” said Cook, the 1991 Bassmaster Classic champ. “It’s a good month (temperature wise), the fish are active and they are out running around catching food.”

The latter comes as bass look to build back their reserves after the rigors of the spring spawn, often at the expense of the shad spawn and the bluegill spawn beginning to occur in many areas this month.

With such food resources tempting bass – not to mention the fact that a bass might want to exact a little bit of payback on nest raiding bluegills – and there’s plenty of reason to continue to look shallow for bass action this month.

“It may not be the best time for the biggest fish of the year, but it might be among the most active times of the year,” said Cook, a six-time winner of BASS events while pocketing some $1 million in career earnings.

This year – particularly in Oklahoma where Cook lives and North Texas where yours truly lives – the post-spawn cycle is being inundated with flooding rains that have numerous lakes on the rise.

“It’s a pretty standard thing for fishermen when that is happening, if the water is up, then you go to and fish the flooded vegetation,” said Cook. “If it’s not up (where you live), then you have to fish what (fish attracting) habitat is in the water – boat docks, laydowns, etc.” 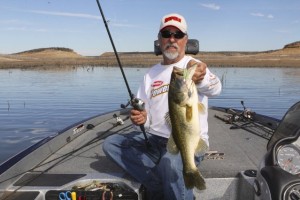 When it comes to flooded vegetation, some types are better than others according to Cook.

“Flooded bushes are among the best,” he said. “Willow trees, buck brush or button bushes, those are the primary types of vegetation that flood (on many lakes).”

In such areas, Cook indicates that he likes to fish quick-moving lures like spinnerbaits and buzzbaits to find concentrations of active fish.

Other considerations to keep in mind for such shallow water fishing are hollow-bodied frogs and swim jigs tossed in and around the newly flooded vegetation.

Once he does find some active fish up along the bank, Cook will then slow down and work the heavier cover more thoroughly with something like a Power Bait tube or a 10-inch Power Bait worm.

“Earlier in the year, I would have been using a jig more,” said Cook. “But in May, the fish are post-spawn and looking for the most readily available food (source). That will be shad along with some sunfish (in most places).

“They’re up there in the shallow water looking for food, so that’s why I’d recommend a tube, a worm or a spinnerbait, since they better imitate a shad or a bluegill.”

If there’s a mistake to avoid during the month of May, Cook says that it’s to resist the temptation to keep the Power Poles planted too long.

“Staying in one spot (too long), that’s probably the biggest mistake anglers make right now,” he said. “Most lakes have lots of coves and the coves have lots of bait. So there are lots of places where the active fish can be this month.

“In other words, don’t fish where the fish have been this month, staying there too long. Instead, go on and explore new water (to find active fish). If they quit biting in one spot, change and find a place that has more active fish (once again).”

For Cook, the bottom line is that the month of May is one of the better times of the year for an angler to wet a hook in the Sooner State, the neighboring Lone Star State and in just about any southern venue that largemouth bass might call home. 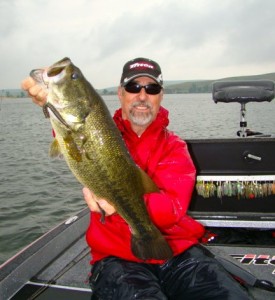 “The truth is that the whole year can offer up some pretty good fishing action at times,” said Cook. “But sometimes, the catching is better than it is at other times of the year.

“And from my experience, May is a good month for both, for fishing and for catching.”

Even if the post-spawn water is high and rising this year in numerous portions of America’s big bass country.