Up in the Grass with Dennis Tietje

12/13/2011 – It may be wintry cold throughout much of the country, but in the deep southern climates of places like Louisiana, Texas, Florida and Alabama it’s still late fall. Those states contain some of the country’s best grass fisheries and while the fish certainly don’t abandon the grass this time of year, the way they relate to it tends to change as bitter cold weather approaches.

“Fish always suspend this time of year,” said Louisiana-based Elite Series pro Dennis Tietje. “But they don’t just suspend around schools of bait. They also suspend in the grass.” 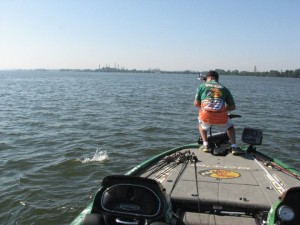 So all of those anglers who’ve tried to ply the grass they fished successfully in the summer – letting their baits drop to the bottom – and come away with nothing to show for it aren’t missing the boat completely. They may be in the right places, just looking to the wrong portion of the water column.

“Everybody loves fishing matted hydrilla,” Tietje continued. “But the normal guy may punch his bait and let it go straight to the bottom. When the fish are on the bottom, it’s anybody’s game, but when the water cools the baitfish suspend in the hydrilla and the bass often suspend right there with them.”

On lakes like Toledo Bend and Sam Rayburn, that grass may grow in 15 or 18 feet of water. The trick is not only to figure out that they’re suspended, but the particular depth that they’re using. That takes a little bit of daily trial and error, but once you figure it out “it’s pretty easy,” Tietje said. It’s not limited to the deep hydrilla lakes – he said he’s also found fish suspended in the grass in 3 feet of water on the Atchafalaya Basin – but that’s where it’s often most repeatable.

The first sign that this bite is on is often a matter of happenstance. An angler will remark that the fish “hit it quick” or state that “when I picked it up, he was there.” The trick is to figure out how far the bait fell before he ate it. “It’s tricky,” Tietje cautioned. “A lot of times there are two stages of the mat, at the surface and then three or four feet down, and the fish will sometimes get in between those two markers. I’ll take a marker and make marks on my braided line every two feet or so and then when we figure out that we’re getting bit on the way down, we’ll start fishing that section. When the mark gets to the mat, I stop it there. It might be as little as a foot, but you have to stop it and hold it there. Bass feed up more than they feed down.

“When they’re feeding tight to the mats, it’s critical to stop it,” he continued. “They may not even swim a foot down to eat it.” 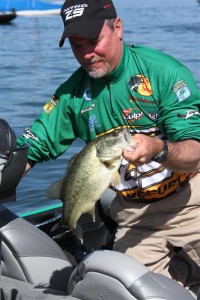 Once the bite is established, Tietje tries to break down the miles and miles of grass that confront him. In the summertime, he’ll focus on points or other irregularities in the grass line. In the fall, they may still be around points, but he’s equally focused on finding the thickest, greenest mats he can. He’s convinced that cold water suspending fish will move further back into the mats, so he’s not concerned with edges as much as he might’ve been a month or two earlier. However, as the temperatures continue to cool and the grass starts to die off, the fish will once again migrate to the edge. “It becomes dirty-looking just before it dies,” he said. “It’s gradual, but even a few days can make a difference.”

With the fish located and their key feeding depth determined, you’ll still need the proper tackle to get them out. As with just about any matted grass fishing, this is not the time for finesse gear. Tietje likes a 7’6” Bass Pro Shops Carbonlite flipping stick. “You want to use a big rod with the power to get the fish coming up,” he explained. “If your rod is too light or too short, the fish will pull you down and that leads to problems.” He pairs it with a high-speed reel. This is particularly important when the fish are back in the thickest grass around. “If you’re making a long pitch, you want to be able to engage, get on him and get him out.” Spiderwire braid in the 50 to 65 lb. class completes the rig.

He said that by the time the fall rolls around, the fish feed primarily on adult crawfish. This doesn’t necessarily affect the size of the plastic lure that he throws – he still prefers something compact which slides through the holes in the grass – but it impacts his color choices. He tends to steer toward black and blue before anything else, but also has dark reds and black craws ready to go. When the fish are really keyed in on baitfish instead of craws, he’ll still use similarly-shaped baits, but will change colors. Salt and pepper can be good, but his absolute favorite in this situation is smoke with blue flake. 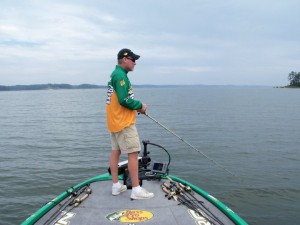 He’s also very particular about his tungsten weights. He almost never goes below 3/4-ounce in this situation and may go up to 1.25 ounces. The in-between size, an even ounce, gets the most work. “It falls through cover fast, but when it breaks through you can stop it,” he said, as opposed to even heavier weights which may be tougher to control. “Then, when you stop it, they’ll hit it immediately.”

As others transition to more typical wintertime haunts, breaking out the jigging spoons and blade baits, Tietje tends to stick with the grass bite a little bit longer. The common belief is that suspended fish can be among the toughest to trigger, but Tietje has found that with a little practice, those suspending in the grass can be the easiest to pattern.