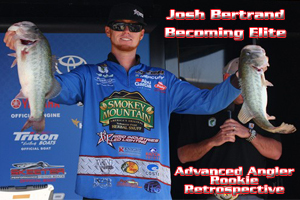 I’ve recently wrapped up the final two events of the 2013 Elite Series Season. I had high expectations that these two events would be both challenging and exciting. They didn’t disappoint..

Before I could do any fishing, I had to drive approximately 38 hours from Arizona to Upstate New York for the 7th stop on the Bass Master Elite Series on the St. Lawrence River. Regardless of who you are and where you are going, 38 hours is a long time to spend in a truck! The Hatch Toyota Tundra has seen its fair share of miles this season, around 40,000 actually.

If I could use one word to describe the St. Lawrence, “Massive” would be my choice. We had access to 90 miles of open-river along with Lake Ontario which speaks for itself in size. Lake Ontario is one of the top smallmouth fisheries in the country, while the river is pretty darn good as well. You had the choice to make the daunting run to the lake and fish for less pressured smallmouth, or stay in the river for a longer day of fishing with less risk of encountering rough water. Day one of practice made my decision to fish the river easy after catching some smallmouth in the 4-5 pound range. My best action was through a 6-7 mile long stretch of river full of shoals in 15-25 feet of water. I decided to commit to this stretch of river for the remainder of practice and try to dial the bite in.

To catch these smallmouth, my best technique was fishing a dropshot rig on the edges of the shoals where the current was broken by boulders. The rig consisted of a #1 GamakatsuDropshot Hook, a 3/8 to ½ ounce BPS Lead Dropshot Weight (Depending on current and wind), and a 3” Berkley Gulp Minnow in the Emerald Shiner color.  I fished the rig on a 7’3” Medium Light action TFO Tactical Series Dropshot Rod with an Abu Garcia Revo Premier 20 Spinning reels spooled with 8 pound test Berkley Nanofil line.

Day one of the tournament was good enough to get started. A weight of 19.5 put me in 18th place and I felt like I was refining the pattern by the end of the day. It’s amazing how the in the heat of the moment you force yourself to learn the critical intricacies of a pattern more than you sometimes will in practice. Day two was my best fishing day of the tournament. However, after a costly culling penalty of two pounds, my daily weight was reduced from 20.13 to 18.13 lbs. where I remained around 18th place.The third day of the tournament was another good day of fishing. Having to work a little harder for bites with the increased pressure myself and several other anglerswere putting on the fish, I was lucky to weigh five quality fish for over 20 pounds to move into 10th place. It was clear that this stretch of river held big fish, it also attracted many big sticks during the tournament. I fished most of the week within eye shot of Kevin VanDam, Jason Christie, Gerald Swindle, and Ott Defoe.

Happy to make the final cut, day four was about having fun and fishing hard. After beating the same shoals up for three tournament days, it was a relief to have the field cut down to only 12 anglers, where you are more free to fish new areas and leave your best spots alone to replenish. As I was running from shoal to shoal, I watched the depth run up from 32 feet deep up to 14. Most of the general area was a maximum depth of around 26 feet, so this was worth investigating. As I pulled up and made my first drift I bagged the biggest smallmouth of the day. It turned out that 4 of the 5 fish I weighed in on the final day were pulled off this same shoal.

Overall, the St. Lawrence River was a highlight of the season for me. Not only for the fishing, but for the people I was able to share the good times with. My parents flew in from Arizona to watch the weigh in’s and hang out. It was special to finish in the top 10 with two proud parents in the first row cheering every day. I was also able to catch up with one of my best friends, Mark Pacella. Mark and I fished tournaments for years in Arizona before he moved to Watertown, New York. It was great to see Mark along with his wife Adrian and son Abraham. At the conclusion of this tournament, I sat in 46th place in the points standings headed to Detroit. A good tournament on the Detroit River would potentially mean a trip to the Bass Master Classic.It was once again time to bear down and prepare for the last battle of 2013…