Tommy Biffle finds his favorite music on a SiriusXM satellite radio station called “The Highway”. Found on Channel 59, they spin the latest country music. But it was TLC’s rhythm and blues hit “Waterfalls” that played heaviest in my mind as Biffle recounted his daredevil-like Day One at the Bassmaster Elite Series’ “Alabama River Charge.”

The song “Waterfalls” spent seven weeks at #1 back in 1995, and its lyrics are a perfect fit for Biffle’s self described James Bond like tactics in a bass boat yesterday. “Don’t go chasing waterfalls, please stick to the rivers and lakes that you’re used to.”

Biffle ran an estimated 60 miles from launch yesterday, burned 46 gallons of gas, and attempted to climb-up over two shallow waterfalls in his Mercury powered Ranger bass boat. “I made it over the first waterfall, it was the second that got me,” lamented Biffle.

At 10:00 a.m. Biffle was without a lower unit on his outboard. “The prop was still on there, but one big rock knocked the lower unit clean off,” said Biffle.

“Jay Anderson and Andy Stallings (both well-respected marine service technicians) are the ones that deserve to be talked about, not me. Those two guys drove all the way up there to where I was stranded and put a new Mercury lower unit on so that I could get back to fishing,” said Biffle,  showing a smartphone photo of the formerly destroyed part. 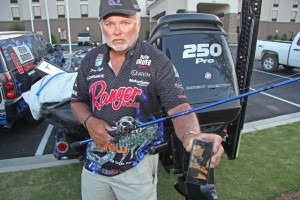 Ironically, there was a small boat ramp located barely above the waterfall where Alexander and Stallings gained access to Biffle. The ramp became the ‘service yard’. But with no outboard power, and a very fast running current, it was all Tommy could do to keep his boat from being swept over the falls. “Jay and Andy were hollering at me to not let it go over the falls,” said Biffle.

With Jay and Andy’s skilled help, Biffle was able to continue fishing, but due to lost time, by noon, Biffle had only boated one small keeper. No surprise, a Quantum EXO 100 reel spooled to 25-pound Sunline fluorocarbon line, tied to the career-building jig that Biffle’s become famous for, salvaged four more keeper bites in short order and resulted in an 11 pound 9 ounce limit for the day.

When asked his age, Biffle responded, “Uh 55, no maybe 54, old enough to know better, and too old to be jumping up over waterfalls.” “I’m thinkin’ about shavin’ my head. I’ve got three buddies my age that are all millionaires, and they’re all three bald. They spend their days goofin’ around, while I’m out here jumping over waterfalls in a bass boat to make a living.”

Fact is, you don’t climb to the top of the charts as a pro angler without guts and competitive fire. Biffle may have a grey beard and stiffened body movements, but obviously, there’s still plenty of flame and fortitude. “My back hurts every day, but what hurts the most today is my butt from not catching them better. You do what you do. Another boy in the tournament made it over both those waterfalls, and he caught a 17-pound limit today.”

In ironic, yet fitting, conclusion to the story of Biffle’s drive and desire, comes the next line of that famous TLC song from ’95 – “I know you’re gonna have it your way or nothing at all. But I think that you’re moving too fast.”