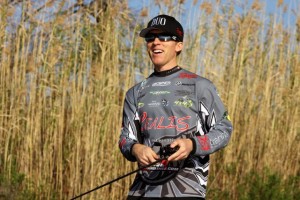 Today DUO International officially announced its sponsorship of 2010 FLW Champion and first-year Bassmaster Elite Series angler Kevin Hawk.  DUO recently announced the introduction of Realis, a new quality line of Japanese hard baits from the company that is one of the top-selling brands in Japan.

“We at DUO are very honored to work with an angler with a proven track record like Kevin. His resume speaks for itself and we are sure that he, utilizing our products, will find long-term success on the Elite series as well. In addition, we also plan to work together with Kevin on perfecting and adding to our range, so anglers can look forward to some exciting items coming from our brand.”

“DUO’s attention to detail is what separates it from every other hard bait company out there.  I’ve been fishing the Realis line up hard this year and I can tell you all the DUO Realis hard baits run true out of the package and help me catch more bass.  I’m honored to represent such an impressive product and company.”

Headed by one of the world’s best Japanese lure designers, Masahiro Adachi, DUO is a company of impeccable quality, incredible innovation, and a mindset of forward thinking.  Adachi’s dedication is obvious in every one of his creations.  Mr. Matsushita and Mr. Adachi established DUO Japan in 1995. The gifted duo began their journey with a philosophy to provide “a total package” in premium baits, paying special attention to detail, sacrificing nothing in quality, form, function, and value, while  giving the angler a complete experience.

DUO International (Japan) manufacturers a large array of saltwater hardbaits, accommodating very specific applications, as well as a freshwater line, and new for all markets, is the bass-focused REALIS line of lures. The REALIS line will be expanding to better suit the needs of North American anglers. “We look forward to working with Kevin and other top anglers to bring new products to market.”

Raised in San Diego, CA, Kevin Hawk, 33, now resides in Guntersville, AL.  He is the 2010 FLW Cup Champion.  Hawk won the 2012 Bassmaster Southern Opens points championship and fishes on the Bassmaster Elite Series.Hawkis active on his Facebook fan pagewww.Facebook.com/KevinHawkFishing and www.Twiiter.com/HawkFishing.  His website is www.KevinHawkFishing.com.