Falcon Lake, Texas — Bass Pro Bradley Roy is tied for 14th place with Bobby Lane, both anglers weighing in 25 pounds, 9 ounces apiece on the first day of Bassmaster Elite Series competition. On many lakes, a sack of fish like that would put an angler within a frog’s hair of first place. But this is Falcon, where Paul Elias broke a 4-day Bassmaster Elite Series record in 2008 with 132 pounds, 8 ounces. Roy will need to bring ten extra pounds tomorrow to overtake the leader, Keith Combs. On this lake, that’s do-able.

We caught up with Bradley Roy as he was unwinding from a windy day on the lake, and here’s what he told us. 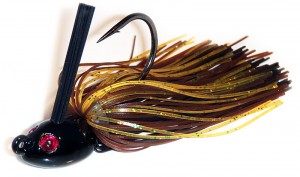 TM:     I know you’re pumped after the day you had on Falcon.

BR:      We’re not getting a lot of bites, but I’m getting the right bites. I hope I can get some more tomorrow.

TM:     A lot of guys today were losing fish in the kind of cover you were fishing, too. It looked pretty tough.

BR:      I was flipping a 3/4-ounce [Taylor Man’s Custom Lures] Hawg Seeker jig. They’d been eating that same pattern in a half-ounce pretty good, but the wind got up a little bit today so I went a little heavier. It’s a Taylor Man’s pattern we developed for Toledo Bend, with black, brown, and amber. They’re eating it down here on Falcon pretty good, too.

TM:     Where were you fishing today… what type of cover?

BR:      I’m flipping these bushes and trees; anything that’s in the right depth zone, about three to five feet of water. But mostly the bushier type of trees.

BR:      It’s both. There’s some out in the lake. If you find them out in the water a pretty good ways, they seem to be better.

TM:     What parts of the lake are you fishing? As far as location, are you running a long ways?

BR:      There were several boats, but the lake is fishing pretty big so I didn’t have too many boats right on top of me.

TM:     What was your main focus today and why?

BR:      I planned on the fish being deep here, but with the water temps a little cooler than what it should be for this time of year this far south and a full moon, I think a lot of those fish are hanging shallower around cover instead of getting up on rock piles and stuff. That’s where my better bites came in practice,  and I just keyed on a couple areas that seemed to have a little clearer water, and that’s where those fish are.

TM:     What water temperatures are you finding there?

TM:     How do you come up with a strategy for a particular lake?

BR:      Any clue you can get… I start with the Internet. And if I know some, I’ll talk to locals or look at tournament results… whatever you can find. Even if it’s a small clue, it’s going to give you something you can factor in to help you catch fish. So I get everything together, everything I can get my hands on and then put that to test on the water in the few practice days we’ve got and see what makes sense and what doesn’t and just go with that.

TM:     How do you get the most out of your prefishing time?

BR:      That’s a really good question. I like to cover water. A lot of time it seems to me that I’m still practicing on the first tournament day, like I don’t have an area completely figured out because I’ve tried to cover so many different areas of the lake on my prefishing days, then I go back to the area I thought was the best. So I think the key to prefishing is covering water. Usually there’s an area that’s better than anywhere else, so I want to make sure in the short practice period that I try to look at everything and see that sort of stuck out to me. I’ll go back there on the first day of the tournament and really pick it apart.

I feel pretty good catching all my fish today on the old Hawg Seeker. I went by somebody today who was getting more bites than me…they were setting the hook a few more times, but they ended up with quite a bit less weight than me. They said, “Man, you ought pick up something else instead of  than that jig, because they can spit it.” I said, “If I get a bite on this jig it’s going to be the right one. You know what I’m saying? I stuck with it all day long.

Tomorrow I may have to switch up to get a few more bites. The fishing will be tougher because we’ve caught fish out of those areas, but that’s all right.

Today’s was the biggest bag I’ve ever weighed in professional bass fishing.

Bradley Roywas the youngest angler ever to compete at the pro level and win the Bassmaster Elite Series Rookie of the Year crown. He has qualified for the prestigious Bassmaster Classic twice. Follow him through his website, www.BradleyRoy.com, and at www.facebook.com/ProBradleyRoy.