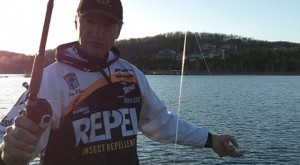 There is one true link to the origins of Flippin’ on the professional tours, and that person is Gary Klein.  The Weatherford, Tex. pro learned how to employ the Flippin’ technique directly from Dee Thomas; the inventor of the technique.  However, his learning the method was not because he happened to draw Thomas at an event and pick it up osmotic-ally; Klein calls Thomas and his wife Terry his adopted parents.

Thomas invested hours, days, weeks and years helping Klein become the link from the origins of his technique to the modern angling world.  As such, there is no better angler to help us understand better how to employ the Flippin’ technique, and blend it with the modern adaptation called Pitchin’.

In this Advanced How-to video, Klein does precisely that; he instructs us how to Flip and Pitch, and then shows how the two techniques can be used by anglers moving down a bank loaded with visible targets.

Watch, as this true Legend of the Sport shares with us years of learning in this feature video filmed while at the recent Toyota / Quantum media days at Table Rock Lake and Big Cedar Lodge outside Branson, Mo.