Shaw Grigsby stood sacking groceries in a Gainesville, Florida Publix store and spotted a flyer on the wall that would change his life. He was 16. It was his first job. The pamphlet touted a bass tournament three hours up the road at Lake Seminole.

Spurred by a childhood rich with hunting and fishing, he and Boy Scout buddy Gerry Bevis made the 185 mile trek to Bainbridge, Shaw entered the tournament, caught one scrawny bass on a red plastic worm, and realized a passion that’s made him a living legend.

Today he enters Day One of the Bassmaster Elite Series event on Lake Seminole reflecting on how that first tournament 41 years ago became the stage for two of his nine B.A.S.S wins and a fame-filled career.

He’s also wondering why he can’t seem to locate any fat spawners among the many beds he spotted in practice. “Trust me, this lake has some ‘mongos’ in it – like 10, 11 and 12 pounders, but of the 80 or so beds I spotted in practice, I’ve yet to see anything much bigger than 4-pounds,” lamented Grigsby. 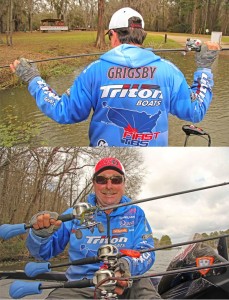 Like every top tournament pro, Grigsby is also an unpaid part-time meteorologist. He knows there won’t be 18-inches of snow in Bainbridge, GA like they’re forecasting for Buffalo, NY and Burlington, VT, but there will be major gusts of very cold Winter Storm Vulcan air blowing across Seminole to begin this tournament, and that won’t help his search for sizeable shallow bass on beds either.

That said, while eight of his nine career B.A.S.S. wins are tied to spawning bass, the exception being a spinnerbait win on Lake Sinclair, GA, he knows he has to look for big fish away from the bank. “Personally, I don’t think this tournament can be won purely off spawners, no matter the weather,” says Grigsby.

“The awesome thing about Seminole is it combines all the best attributes of Florida’s shallow vegetation with the option to catch ‘em on a deep ledge like you would at the more classic southern reservoirs we compete on,” said the always upbeat Grigsby. “Yea, I’ve won here twice off spawners, but I remember Gary Klein winning here by flipping shallow, and David Fritts winning here off deep crankbait fish.”

Evidence of his thoughts about a variety of patterns are easily found tied to several Quantum reels on his front deck decorated with lures ranging from a green pumpkin/blue jig he’ll pitch at spawners, to a 3/4 –ounce Red Eye Shad for deeper fish.

Still, his thoughts keep drifting back to the girl that brought him to the dance. “There’s just something about sight fishing, man. To be able to look into the water and see a bass looking back at you. That will never get old,” he confesses.

So Grigsby will keep looking. Searching for sizeable fish on beds that he seems to make a personal connection with like few others ever have in the history of the sport. “To win on this lake, you’re looking for beds where 3-pound males are paired with the more important 5 to 10-pound females. But in practice, I found none of that. And it’s killin’ me.”

But only a fool would bet against Grigsby in this derby. There will be bass on beds. And he will remain upbeat until he finds them, just as he has since his grocery sackin’ days 41 years ago.