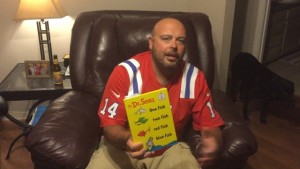 Our friend Massole has been inconspicuously absent from the pages of Advanced Angler lately.  He made a quick stop by on our Facebook page to say happy birthday to our managing editor, Dan O’Sullivan, earlier this month.

But, as we’ve come to find out, the circumstances surrounding Tom Brady and the Deflategate controversy has had our beloved correspondent a little, shall we say, despondent over the whole situation.  As he is wont to do, Massole has been in preparation for the upcoming Patriots season.  However, while he would normally be pouring over stats and rosters and trying to figure out his prediction of how big a success the Pats season would be; he has been avoiding the news.

Who can blame him with the Red Sox being in last place in the American League East, and Tom Brady’s season tied up in the courtroom?

What he has been doing to pass the time, is reading.  His selections include some of his young daughter’s favorite toddler books.  Ironically, reading these highbrow selections has turned his attention toward bass fishing, and how some of these books remind him of his favorite bass anglers.

The result is the pilot of a new segment for AdvancedAngler.com entitled “Story Time with Massole.”

Get a cup of tea, or a large iced Dunkin Dark Roast with milk and two sugars with a six pack of Sam Adams as a chaser in his honor, and cuddle up for Story Time – The Massole Way!