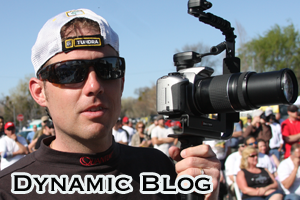 Terry “Big Show” Scroggins seems anxious. It’s Day One of the Bassmaster Elite Series tournament on Toledo Bend and the normally jovial, do-anything-for-the-guy-next-door kinda guy seems like he’s pushin’. Mustering all the patience he can just to finish the interview.

“On a scale of 1 to 10, it’s about an 8 on the ‘tough scale’ out there,” says Scroggins. “The lake was full of vegetation two months ago, but now you can’t hardly find any,” explains Scroggins with a tone of frustrated concern.

“I had about five keeper bites on Monday.  Yesterday, I caught about 30 bass, but hardly any of them were 14-inch keepers. I’m really struggling to catch quality fish. That’s my biggest concern,” said Scroggins.

Scroggins shares lodging with his Toyota teammate Gerald Swindle on tour, and the two often share information. “I feel bad for “G”, because as tough as my practice was, it’s been even tougher for him the past three days,” said Scroggins. “Heck, I even shared a couple of my waypoints with him last night to try to help him out.” 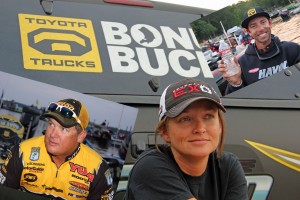 Then finally, Scroggins, whose big heart is matched to his big appetite finally succumbs to the jitters and politely excuses himself from the interview, stating, “man, I gotta go bud, Swindle is about to back down the launch ramp and he’s got my turkey sandwiches.”

Not just any turkey sandwiches. Turkey sandwiches made fresh by Swindle’s wife LeAnn, and complimented by her own version of lucky cookies from a recipe Scroggins’ mom Doris gave her. “The recipe is sort of secret, but I will tell you they have peanut butter, chunks of both dark and white chocolate, and Mexican vanilla in them,” grinned LeAnn as she sits on the bumper of Gerald’s Tundra watching the sun rise over Day One launch from beneath her blinged-out Quantum EXO hat.

Just down the dock from Scroggins sits Mike Iaconelli swigging bottled water in an attempt to properly hydrate himself for yet another day of 90-degree heat, and humidity levels that rival gym saunas.

Iaconelli estimates he’ll consume at least 12 bottled waters today, and asks his ride-along B.A.S.S. Marshal for the day, Jamie Harris from nearby Deridder, LA, to remind him to eat and drink plenty as Ike probes deep structure for a keeper bite.

“You get into the zone looking at GPS, casting, cranking and thinking, and you forget to eat and drink as much as you need to,” confesses Iaconelli. “Ken Hoover (sports nutritionist) gives me plenty of protein and energy bars, but he also wants me to drink at least a gallon of water on a day as hot as this,” explained Iaconelli, who then launched into an impersonation of Adam Sandler in the 1998 hit movie The Waterboy.

Iaconelli scored a Top 20 here last year, but admits practice got tougher with each passing day. “Monday’s practice was pretty awesome for me, but it got way tougher on Tuesday and yesterday. I’m hoping it was just ‘area specific’ and that by going back to where I was on Monday, I should have a good day today,” said Ike.

Grab your bottled water. And pack a lunch. It could be a long hot grinder of a Day One on Toledo Bend.