Mike McClelland never expected to be where he is. The wisdom rich Quantum pro thought this stop along the Bassmaster Elite Series trail would set up in his favor for a place near the top of the leaderboard.

Instead, the veteran known for methodically probing deep-water structure at this time of year when sweat runs down his Scottish skin is struggling terribly at Toledo Bend. After a meager 7 pound 13 ounce limit yesterday, he sits in 80th place.

“It’s a shame when you’re on a lake this good and you can’t catch ‘em any better than what I did yesterday,” said McClelland as he reached for a Smoke SL100SPT reel. “I’ll be honest, I never did locate any good schools of quality fish in practice. I just never found ‘em, and I’m still in scramble mode,” he admitted.

“As much as I’m disappointed with yesterday, I’m even more disappointed that I had such a poor practice. But I’m going out today with a good attitude, and sooner or later I’m gonna get around a good school,” said McClelland as he finished tying on a wide range of lures that included a big spoon, big worms, and his signature Jewel football jigs. 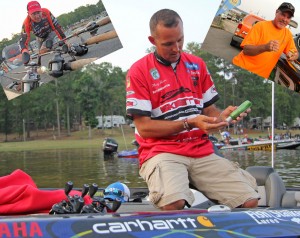 Speaking of football, loyal South Carolina fan Marty Robinson was seen sporting a left wrist wrapped in a Gamecocks watch, and on his right wrist, a Gamecocks bracelet. As he slathered Bullfrog sunscreen on his face, he discussed his latest purchase. “Got me another Tundra,” said the humorous pro that works as a plumbing contractor when he’s not fishing or cheering for Marcus Lattimore. “Look here, anybody that buys a Tundra once to pull a bass boat, will buy another one, and that’s exactly what I did,” he proclaimed in matter-of-fact fashion.

Robinson is continuing a run of new found confidence and success that came along last season, but just up the bank, behind an orange and green Tundra with 60,000 miles on it stands a man forced to sit this season out. It’s Toledo Bend native Dennis Tietje, who spent the past two years competing as an Elite Series angler before herniated L4 and L5 disks forced a medical leave of absence from fishing’s toughest tour and spine smashing 70 mph boat rides.

His back is healing, and his soul is being tested, but his spirit is plenty healthy. Tietje’s going fishing today with minnows, Crappie Nibbles and #1 size split shot. “No, it’s really not about my ego,” said the former crawfish and rice farmer, as the Elites blasted-off a hundred yards behind where he stood readying crappie tackle in the parking lot.  “This is where I started. Crappie fishing just gives me another reason to be on the water,” smiles Tietje over the chance to treat B.A.S.S. emcee Dave Mercer to a guided trip today.

The 47-year-old Tietje has actually been using guided crappie trips as part of the healing process on this monstrous 185,000 surface acre reservoir, booking more than 20 trips the past six weeks as part of a guide service with a very fitting title for Dennis’ life — “Living the Dream Guide Service.”

“Not being out there competing this week hasn’t really bruised my ego. Instead it’s lit a fire. It’s reminded me of how much I miss it. The pain I’ve been through has brought perspective, and this week has just delivered more desire to get back out there,” said Tietje. “But for now, you take what you can get.”