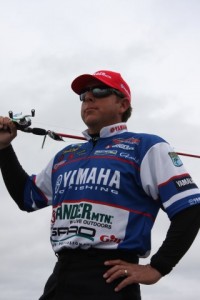 Dean Rojas at the Ready – photo by Dan O’Sullivan

If you are a tournament angler, you’ve no doubt experienced the rapid deterioration in patterns that a weather change can cause. Whether you are tossing reaction baits with wind and the conditions slick off and your reaction bites dies, or you’ve had stable, warm conditions and a front blows into town; difficulties abound for you come tournament day.

One of the more maddening times to have that kind of thing occur is during a sightfishing event. You’ve practice, found your bedded fish, and the day before the event, a storm crops up and the clouds and wind make it hard for you to see the fish you found over the past several days. You know the likelihood is that they are still there, but you can’t see them to present a lure.

Dean Rojas is perhaps one of the best sightfishing anglers in the business. In fact, Rojas still holds the one day Bassmaster heavyweight record with his 45-pound, 2-ounce limit on Lake Toho in January of 2001, and all of those fish came sightfishing. In fact, the first three days of that event were completely centered on sightfishing. The final day saw a front blow through and Rojas had to make an adjustment in order to become the first man to eclipse the 100 pound mark in winning with 108 pounds, 12 ounces.

He turned to a topwater bait that day, and it set the stage for a backup plan that has produced for him on multiple occasions since. “I love to sightfish,” said Rojas. “But there are times that you need a backup plan because of the conditions, and for me, I turn to my other favorite application – frog fishing.” 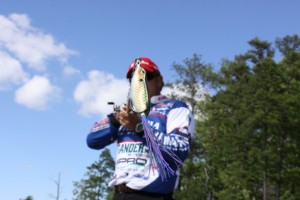 Dean Rojas with His Weapons – photo by Dan O’Sullivan

WHAT???
Yes, you heard him correctly, Rojas throws his signature SPRO Bronzeye Frog on bedded bass and makes those fish respond to it under the right conditions. “It doesn’t work in every case,” Rojas said. “But, if you get the right conditions, a frog can produce giant fish when they are still on beds.”

He said he always has it tied on this time of the year, but especially turns to it when a storm front is approaching. He prefers to use it when a warm storm is approaching and the air conditions are warm and muggy, with the cloud cover making sightfishing tough.

“That is frog time,” he said. “I’ve spent years experimenting with my Bronzeye Frog in every situation and I know when to apply it most effectively.” 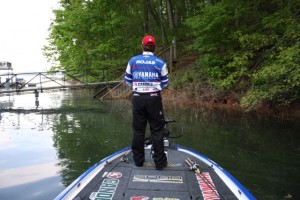 WHY???
Rojas is quick to point out that bass protect their nests from predators during the spawning season, and those predators can be numerous. While we envision a bluegill being the primary culprit most of the time, a lot of other aquatic creatures re threats as well. One of those is a frog, and another, while they may not be seeking to eat the eggs are ducks or coots that pick the grass out of the shallows. Rojas uses his frog to elicit strikes from bass that are protecting.

“I think that a lot of times they are just really trying to make the annoyance leave,” he said. “But, the result is the same, they come up and try and crush the thing, disorient it and make it leave; we just happen to strike back”

Frog Setup
Rojas tends to use a little bit softer rod for throwing his frogs than a lot of people do. He wants a rod that has enough tip so he can roll cast and skip the frog under overhangs; especially in open water situations around cover. He is in the process of finalizing two new frog rods for Duckett Fishing, one for this type of presentation, and longer, heavier version for fishing matted vegetation. 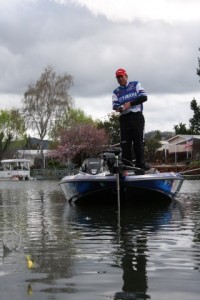 in the blue / green camo color. “A lot of people remark when I tell them I use 80-pound Sunline for my frogs,” he said. “But, our 80-pound-test is the same diameter as most other company’s 65-pound braid; so I go heavier.”

He lets conditions dictate the color choice of his frog. He said that he likes to keep his options open for experimentation, but he always has white, black and sunfish colored frogs at the ready this time of the year.

HOW???
Rojas said that he looks for bass to pop up in the small pockets of the main body initially; especially after the water temperature reaches the mid 50’s. Once he finds bedded fish that he cannot see, or needs to stay off of, he begins to present the lure around the cover they are spawning with in order to create a response.

Once he presents the lure, his objective is to make the lure move as much as possible without leaving the strike zone. “Most beds are three feet and under, and if I can walk that frog side t side multiple times in that space, I stand a better chance of making a fish respond,” he said. “I walk the frog on slack line and make it turn sharply to create a commotion above the nest.”

As the frog leaves the bedding area, he reels it in and makes another presentation. He moves down the bank looking for likely spots to make those presentations to. 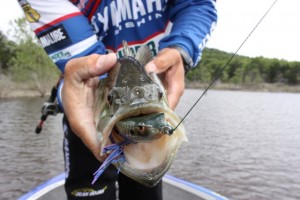 Final Recommendations
For someone beginning to try tossing a frog over bedded fish, Rojas had two parting thoughts for anglers to consider. The first is to pay attention to short strikes. “If I get two or three reactions but they are obviously not trying to take the frog n their mouth, I put the frog down and try other things,” he said. “Those other things are baits that have a few treble hooks hanging down off the belly.”

He fishes those by pitching them to the areas hoping to make a fish respond and take the lure. The other tip was to have those follow up baits ready. “They will strike and miss, and it’s good to have something to quickly put back in there,” he said. “I’ve I usually have rigged as follow up baits; a Big Bait Baits Cane Stick and Big Bite Fighting Frog, and they, along with the Bronzeye Frog as the primary weapon have helped me produce fish when the conditions wouldn’t let me sightfish effectively.”