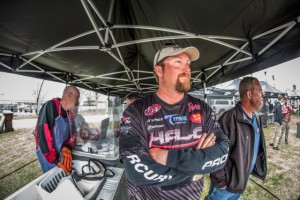 KISSIMMEE, Fla. (March 7, 2015) – Professional bass angler J.T. Kenney slipped a bit and weighed in his smallest limit of the tournament, but it was still enough to maintain a near-insurmountable 12 pound, 8 ounce lead heading into the fourth and final day of competition at the Walmart FLW Tour at Lake Toho presented by Mercury. The top cash award of $125,000 is now his to lose as the world’s best bass-fishing pros continued their four-day battle out of Big Toho Marina on Saturday.

The Palm Bay, Florida, native moved on to the final day of competition as the No. 1 seed with a five-bass limit of 14 pounds, 5 ounces. Kenney’s three-day catch of 15 bass weighing 66-12 gives him a commanding lead over second-place pro Wesley Strader of Spring City, Tennessee.

“I think that I’m really starting to understand those big Florida-strain female bass,” said Kenney, who is looking to bank his second career win on the FLW Tour. “I know that I could have lost this tournament today if I would have gone and tried to catch those big ones. I have a sizable lead, so I went into defense mode. I stayed up in Lake Toho and caught a decent bag of fish.”

Kenney said that he had been catching his fish the previous two days of competition in Lake Kissimmee, using his J.T. Kenney-signature series Halo Rod to cast a Gambler Fat Ace. Due to the overcast weather conditions Saturday he was forced to audible to his backup plan.

“I broke out a Nichols ½-ounce Pulsator spinnerbait and stuck around areas where I knew fish were and caught around 10 keepers,” Kenney said. “My whole plan is coming together. I had a contingency plan for a cold front and today I went to it and utilized it. I knew that when I took off this morning that I wasn’t going to catch a giant bag of fish, but I was playing defense.

The top 10 pros advancing to the final day of competition on Lake Toho are:

Anglers will take off from Big Toho Marina located at 69 Lakeview Drive in Kissimmee at 7:45 a.m. on Sunday. Sunday’s final weigh-ins will be held at the marina beginning at 4 p.m.

Fans will also be treated to the FLW Expo on Sunday from noon to 4 p.m. at Big Toho Marina prior to the final weigh-ins. The Expo includes a Ranger boat simulator, the opportunity to interact with professional anglers, enjoy interactive games, activities and giveaways provided by sponsors, and learn more about the sport of fishing and other outdoor activities. All activities are free and open to the public.