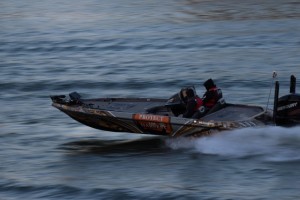 This is the time of the year that fish group up on offshore structure. In fact, they often group up so tightly that large groups of anglers often find themselves fishing in close quarters. Whether it is a tournament day, or any other day, the offshore spots holding schools of fish can more resemble a boat sales yard than a body of water. The phenomenon can make a giant lake fish very small.

The most popular methods for fishing offshore structure are typically deep crankbaits, heavy jigs, big worms and swimbaits. Those techniques are primarily power fishing applications, and when a school of fish has ten or more boats casting one or more of these lures at them all day, a wise angler adjusts.

One of the most effective ways to adjust is to go with a finesse tactic. Shaky Heads and dropshots are excellent ways to accomplish this, but when the water is dirty, they can be less effective than trying to locate a needle in a haystack on a time schedule.

John Murray, the Bassmaster Elite Series pro from Phoenix, Ariz. likes to scale down a little, but still use an offering that bass can see and react to. “I try to scale down and do something a little different, but I don’t want it to get lost in the water,” said Murray. “In dirtier water, I’ve started using a version of the Magnum Finesse technique that is becoming popular because it provides a more subtle approach, but still has the presence to draw big bites.”

He said that the lure works on any type of offshore structure. “It can be five to 30 feet deep, but it is a great structure lure,” said Murray. “All you need to have is a place offshore that bass are holding on. It can be a point, a hump, a ledge or something else that will congregate fish.” 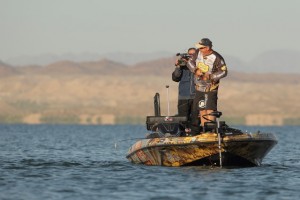 Modified Finesse Heads
A true Magnum Finesse Head features a heavy head and some sort of fixed head poured into the head. Murray prefers to use a different version. “The Gene Larew Hardhead has been a popular head for the Bottom Buggin’ technique, but I use it for this technique,” he said. “I use the 11/16-ounce version primarily, but if the lure is big enough, I will also use the 1-ounce version.”

The reason he prefers the Hardhead is because the swinging hook provides more action and also helps land fish. “That swinging hook allows the lure to move a little more naturally while fishing it,” he said. “It also keeps the fish from getting as much leverage with a fixed hook, so it is a little harder for them to throw the hook.”

Magnum Finesse Lures
Murray said that he prefers bulky, thick bodied straight tailed lures most of the time, however, there are times to upsize. “I prefer to throw a Gene Larew Salt Flick’R because it has more of a finesse type appeal, but still has some size to appeal to larger bass,” said Murray. “I’ve used longer finesse worms, bigger creature baits, and big worms like the Gene Larew El Salto worm are also good when the bass want a little more action.”

He said his color choice is pretty basic. In dirtier water he selects a black and blue color, in stained water he opts for a green pumpkin or green pumpkin candy version or a red bug color, and when the water is on the clear side, then he opts for a peanut butter and jelly color. “I try to keep my colors pretty basic, but give me something that I can be sure they will see in the water clarity.” 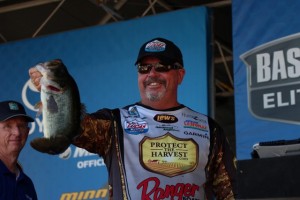 Magnum Finesse Gear
Murray is a fan of longer rods in general because they give him the ability to make longer casts and have additional leverage on the fish when setting the hook and when fighting fish after the hookup. His choice for the Magnum Shaking technique is a 7’6” medium-heavy Team Lew’s rod that he matches with a 6.8:1 ratio Team Lew’s LTE reel filled with 15-pound-test fluorocarbon line. “This setup gives me all the action and power I need to work the lure effectively on the bottom,” he said. “They often hit the lure when it is falling or moving and I need to be able to control them.”

Retrieve
Murray said that the rig offers him many different options for retrieval. “It can be fished several different ways,” he said. “I can shake it on the bottom like a Shaky Head, drag it steadily or hop it like a jig. My most effective one a lot of times is to stroke it off the bottom and let it fall quickly.

“Most of the strikes will occur on the fall, so be ready, but it really is a great way to combat tough fishing conditions or when fishing in a crowd.”