Sometimes you catch lightning in a bottle.

That is what has happened to Joe Medlock of Lake Placid, Fla. did when he started tinkering with a jig several years ago. Medlock is the owner of a company that produces what may be the hottest, “yet to be completely discovered” bass fishing lure available today. 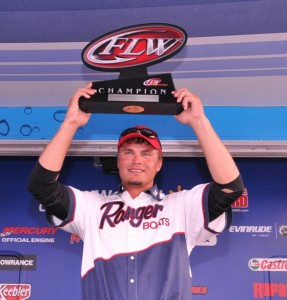 If the name Medlock is familiar; it is because Medlock’s son Brandon has won three FLW Outdoors tournaments in the past two years fishing in Florida. He won the Everstart Southern Division event at lake Okeechobee in January of 2011. he followed that up with a win in the BFL Gator Division trail event on the Kissimmee Chain in April last year as well. For good measure; he won the 2012 Everstart Southern Division event on lake Okeechobee in January as well.

All of it coming on his father’s Medlock Double Guard Flipping Jig.

What is a Medlock Double Guard Flipping Jig?
The Medlock Double Guard Flipping Jig is exactly what it sounds like it is; a jig with two weedguards specifically made for Flipping into heavy cover. The head of the Medlock Jig features a head design that is sort of a combination between a swim jig and a heavy grass jig. The head appears to be a little wider than a standard Flipping jig, and it has to be because it needs to accommodate a pair of brush guards side by side.

The whole jig is built around a 6/0 Gamakatsu heavy wire Flipping hook and he finishes the jig off with a StarFlash Skirt in one of three colors; black and blue, June Bug and Watermelon. 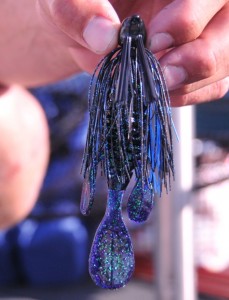 How Did it Start?
Medlock said that he was tinkering with a jig and a Dremel tool one day, and he cut a hole in the head of a jig and added a second brushguards to the head. “I noticed that I got hung up a lot with the jigs I had available because the jig turned against a piece of cover and exposed the hook,” he said. “I thought having two brushguards side by side would help keep the jig from getting hung up so much.”

So, he gave the jig to his son to fish a local tournament, and he won. The Medlock Jig company was born.

Building the Product
Medlock went to his job as a tool and die and moldmaker and started talking to his boss, who helped him come up with some more ideas. With his boss’ consent, he played with the concept and created a mold to produce the lures.

He builds the lures in his home during his downtime, and when he can get time, he competes in local team and club tournaments with his son

Results
Aside from his son’s success in FLW Outdoors competition, the pair has produced some impressive results on their own. The elder Medlock said that they fished in one club tournament together that they posted a winning weight of over 34 pounds and won the event; the second place team produced just over nine pounds. To make matters even more impressive, their limit outweighed the weight of the entire club that day.

“It was a cold day and we were wearing our snowmobile suits,” Medlock said. “The temperatures got into the 30’s and the fish were really lethargic. We were able to put our jigs into heavier cover than the others, so we caught different fish.”

The older Medlock said that he has caught bass up to 12 pounds, 3 ounces on the jig while fishing with his wife at Lake Istokpoga and his son has landed several fish over 10 pounds on it. 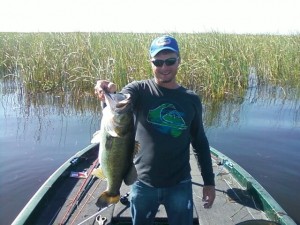 Fishing The Medlock Jig
The Elder Medlock said it is the kind of lure made for the heaviest of tackle. He suggests using 65-pound-test braided line, and he reports often using 80-pound-test braid. He also recommends using the heaviest rod; he uses an 8′ XXHeavy Carrot Stix Flipping Stick because of what the battle entails. “This is not a finesse ’em out kind of technique,” he said. “You have to set the hook and get them out of the cover as fast as you can, otherwise they can wrap you up and you’ll either lose them, or have to go in and get them.”

Brandon Medlock said that the lure is best used as a reaction bait. “I tend to start with just Flipping it into the cover and letting it fall,” he said. “If I don’t get a bite on the initial drop, I start with pulling it out and making the next flip. If they don’t prove to be biting on the initial drop, I’ll start playing with shaking it, or hopping it a little.”

The Next Phenomenon
Every so often a lure comes around that sets the fishing world on its ear. The Chatterbait, The Basstrix Paddletail, the Alabama Rig and now the Medlock Double Guard Flipping Jig. Medlock reported that for the FLW Tour Open at Lake Okeechobee in January, he did everything he could to keep Roland and Mary Ann Martin’s Marina stocked with jigs and that he believes as many as half of the anglers in the Elite Series field had them in the boat this past week. He also believes that as many as 60-percent of the Elite 12 pros were using it on Sunday.