A really weird thing happened at our BASSfest event at Kentucky Lake last week. I’m still having a hard time wrapping my head around it.

On the surface, it appeared that we had a fantastic tournament. Someone at BASS told me that the winning weight, the average weight, and the cutline weight were the highest of any event we’ve ever held at Kentucky Lake.

So from the outside looking in, it appeared to be a fantastic event. All the numbers said so.

But in reality, every angler on tour – and I mean every last one of them I talked to – said they’ve never seen Kentucky Lake this hard to fish. I know I haven’t ever seen it that tough.

Even Kevin VanDam, who finished second and caught 94 pounds, told me the fishing was the worst he’d ever seen for that lake.

Again, I know the weights were there. Edwin Evers won with 97 pounds. Heck, I finished 36th (out of a field of 125). I caught more than 50 pounds in three days, which isn’t bad at all.

But what made the anglers say the fishing was tougher than usual is that you can’t imagine how many fish we normally catch on Kentucky Lake. I believe Kevin has had days where he caught 80 or 90 fish. I’ve had days where I caught 50.

But this year, something funny was going on. I was lucky a couple of days to get three bites during a whole morning of fishing.

Don’t get me wrong. It’s a great fishery. It was just different this time.

You usually win here fishing deep. Getting on ledges. But a small group of angler figured out that the winning pattern seemed to be in about five to six feet of water.

As for me, I never had a chance to get into the winning group. I was trying to catch fish the traditional way, and I didn’t catch nearly enough to get near the top – but I did catch enough fish to get inside the cutline. It would have been risky to completely abandon what I was doing. 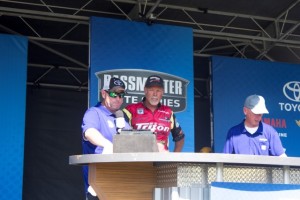 Boyd Duckett at the Scales on the BASSfest Stage

Here’s the bottom line. I had a terrible practice. Most of us in the field did. We had a lot of rain and wind going into the tournament, and the fish weren’t biting. Then about the time the event started, the weather improved and some fish started biting – but the bass weren’t in the places you would have expected them to be.

So I was tickled to finish in 36th place. I would say I’m ecstatic.

There is a message I’ve repeated a lot of times during the past several years. I’ve said it at seminars, and I’ve written it in the columns that I put together.

But even more often than I’ve said it in seminars and columns, I’ve said this to myself.

The message is: It doesn’t matter so much how you fish your good events. What really counts is how you fish the bad events.

Back in the days when Tiger Woods was a dominant golfer, he impressed me a lot on those days when he was just crushing the field. He was so good some days, it didn’t seem like anyone was competing against him.

But when he impressed me the most was when he was not on his game. He would scramble and work and claw his way through a bad round. And in the end, he was right there in the mix. He was not going to accept defeat.

Tiger Woods made the best of the bad events.

I’m pleased with how this Kentucky Lake tournament went because when it was obvious that I was going to have a hard time catching fish, I just decided to keep scrambling and make the best of what was in front of me..

I stayed on my primary pattern until it just wasn’t producing. Then I scrambled and caught enough fish to go from 48th on Day 1 to 36th after the second round and 35th after the third. I also jumped 10 spots to 37th up to 27th in the Angler of the Year points race.

I had a terrible practice, which meant I could have finished somewhere near last place. But I scrambled, kept my head, made some good decisions and fished hard from the first cast to the last.

What could have 120th place turned into 36th. Did I mention that I’m really happy about that?