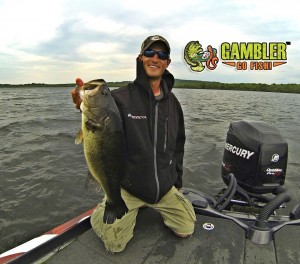 Despite the popularity of the soft swimbaits, I still believe there are a lot of anglers in the Northeast that don’t take full advantage of what these baits have to offer.  Here are four tips to help you catch more fish on these baits year round.

One of my favorite ways to fish this is to throw it across weed flats and along shallow drops during the prespawn period, but don’t put it down once summer has fish in the slop. Depending on the time of year, I will burn across the surface or keep my rod tip high and slow roll it. 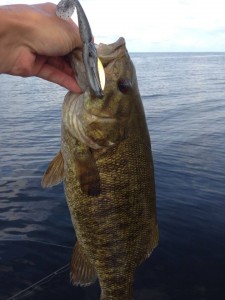 Either way, you want to make the lure create a wake as you buzz the Big EZ across emergent grass.  This method has produced giants in Florida for years and it will do the same thing in the Northeast.  Using this technique with swimbaits covers more water than a frog and produces some truly violent strikes!

Deep Slow Roll During late summer when fish move deeper there is potential to catch some of the biggest fish in the lake on swimbaits while they are sitting on structure spots.  I concentrate on throwing over rock piles or gravel humps in water deeper than 15 feet.

While a lot of anglers are throwing Carolina rigs and crankbaits over offshore structure, I like to give the fish a different look by slowly reeling a Big EZ on a 3/4-ounce jig head just off the bottom.  This is not a technique that will put tons of fish in the boat, but it will definitely put in the kickers you’re looking for.

One tip I can give you is to not set the hook immediately on the bump.  If the fish are bumping the bait, but not hooking up, I keep a steady retrieve and more often than not they’ll come back for more.

One other trick to nab those pesky bump and run fish is to install a Strike King trailer hook that comes with the keeper and place it on the main hook. It won’t interfere with the action, but will stick those short striking fish. 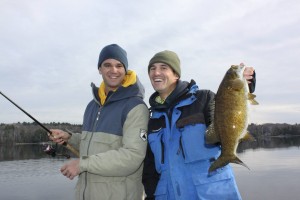 Go Finesse
When the bite gets tough and you have to turn to finesse tactics you don’t have to put the swimbaits away.

Recently, while practicing for an event on Oneida Lake in New York, my friend Joe Holland and I discovered that we could catch some fantastic smallmouth dropshotting the Gambler TZ Swimmer on the edges of grass lines.

There was an enormous amount of pressure in the area and the fish stopped responding to the top waters they readily ate before. We nose hooked the TZ on a 1/4-ounce weight and 6-pound-test Trilene 100% Fluorocarbon line.

The 3-inch swimbait has a subtle kicking action on the drop shot that fish can’t resist. As it swam by the weed beds, the fish that had hunkered down in them would swim out and suck it in.  We caught fish in a lot of places that other anglers were not able to because e gave them something different. 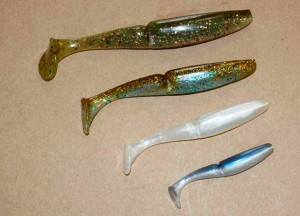 Tips to Keep them hooked!
The biggest complaint about swimbaits is that they seem to lose fish. About two years ago I found that changing from the popular hollow bellied baits to a Gambler Big EZ dramatically increased my hookup ratio, and I think the reason is simple.

The EZ series of swimbaits has a deep groove in the back, for the hook to ride in. When rigged properly on an Owner 6/0 Beast hook, you not only have a weedless offering, but the hook doesn’t have to penetrate much, if any, plastic.

I throw my swimbaits on a 7’ Kistler Magnesium Jig and Toad rod, a 7.1:1 Abu Garcia Revo SX, and 65lb braided line about 90% of the time. The rod has enough backbone to drive the hook and just enough tip to keep it from tearing out.  I have also found that the braided helps make better hooksets when making long casts.

Remember, swimbaits are a tool that can be used all year, so give them a try next time you’re looking for a couple of kicker fish and you won’t be disappointed.