Advanced How-to – (Un)Organizing to Fish as a Backseater

My name is DanO, and I have a tackle problem. 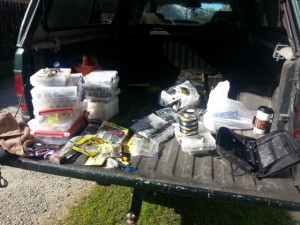 The Beginning – photo by Dan O’Sullivan

I did not know how much of a problem I had until this past week.  I was invited to fish a tournament with my friend Billy Hines on Clear Lake.  The tournament is the annual Lake County Chamber of Commerce event, and has been around for 28 years with different presenting sponsors.

I started getting my rods and gear ready the Tuesday before, and I ordered a few things based on what I expected would work in the tournament.  I started by doing a prudent thing, I made a list of things I expected I might need to fish with.  Then, I made a list of rods and reels that I would need to have to throw the items I had recorded on that list.

I have to admit, it was really stressing me out.  I know, tackle preparation stressing me out, you all feel so sorry for me.  But truthfully, I struggled to figure out how to condense my stuff enough to be able to fish out of someone else’s boat.  Once I figured it out, the working on tackle was easy and somewhat relaxing, but the act of coming up with a plan was frustrating.

I figured out why on Thursday and then I was able to start formulating a plan.  To be honest with you, I am part of the reason I had so many difficulties. 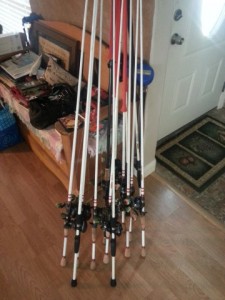 Who Needs this many Rods? Me – photo by Dan O’Sullivan

You see, the tackle industry has done a wonderful job of educating anglers in the benefits of becoming “technique specific.”  As an industry, everything has become so specialized that each product works for one or two very specific applications, and I, as an outdoor writer have written stories an run videos helping all of us work towards being that way.

For example.  Our fishing rods used to be more universal, with a couple of exceptions. Our reels were all basically the same and we had one choice of line.  Now, I have a rod for each thing that I do, I have specific hooks for specific baits and techniques, reels for specific applications and different lines for everything.  Heck, Sunline has even become the first manufacturer to produce technique specific lines.

I know what you’re all thinking.  “Why in the world do you need all of that to catch a bass?”  The truth is, you don’t.  but, if you are fishing competitively, any advantage you can legally gain makes being successful on the water more of a reality.

So, how does a guy who has built his arsenal around being technique specific prepare for a tournament; especially when he is fishing out of someone else’s boat?

First of all, I realize that being completely technique specific is dependent on being a boater.  I’m fortunate that I own a bass boat, and I can store pretty much what I want to, as long as it fit in my compartments. I do leave one empty compartment in my boat behind the passenger seat for a guest or a partner, but most everything else is considered my tacklebox(es). 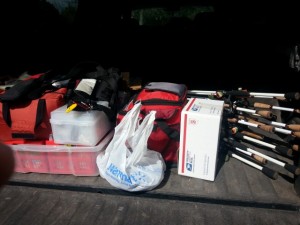 Ready to Hit the Road – photo by Dan O’Sullivan

I put my rods 7’3 and under on the starboard side and 7’4 and over on the port side.  I store heavy stuff like my jigs and tungsten box behind the driver’s seat, I store hardbaits in the compartment to the rear of my front deck and soft plastics in the compartment at the front.  I distribute the weight of my tackle that way, and I know where everything is.  I interchange what goes in there based on time of the year and the lake that I will be going to.

So, when I am packing to fish an event out of someone else’s boat, how do I compress my gear?  That was the problem that was plaguing me and frustrating me last week.  That is until I came to a conclusion that I didn’t have to.

No, I didn’t put everything into the storage compartments of Billy’s Z9 Nitro.  I put a lot; some (typically boaters who are notoriously selfish about tackle space) would possibly say too much into the compartment behind my seat, some in his partially empty compartment behind the driver’s seat, and my rods in the starboard side on top of his backup tackle (see, everyone has it).

The way I fish usually is something I learned fit me from being with and around guys like Mike Iaconelli and Gerald Swindle.  I found out that both of them; self avowed junk fishermen, rig rods as backups and store them in their rod lockers in case they have a feeling.  Their theory is that 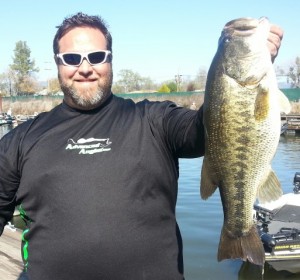 they are more apt to try a gut feeling if the rod is already set up than if they have to stop and tie something on.

I can relate to that feeling, because I’ve had many instances where I felt like I needed to try something and didn’t because I would have had to stop and tie it on.  I’ve also done it and caught key fish

that helped cash checks me in tournaments.

Now my boat is set up that way.  I have a bunch of rods in my locker, I have all of the baits (within reason) that I think I might need, and if I have a gut feeling, I go with it.  So, how do I do that when space is limited fishing from the back deck?

I have several plastic underbed sized Tupperware type storage bins in my shop, and I put all of the “options” in one of them that I could slide in and out on the truck bed.  In that, I put the Plano boxes with hardbaits, my hooks, weights and a couple technique specific boxes for things like bedfishing, Umbrella rigs etc.  I also put at least two packs of each plastic I thought I might use into several Plano Speed Bags and I loaded them into the Tupperware. I put my Mustang PFD and rods in the truck and my line cooler in between. 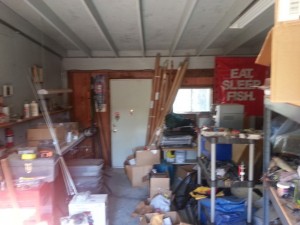 This Needs an Intervention – photo by Dan O’Sullivan

Then I could select the things as options and put them in the storage compartments, and if I needed to adjust overnight, I could.  To be honest, I made a mistake on my selections the first day of the event.  The big baits and lipless cranks didn’t produce, and we scrambled and found some fish that would eat a Biffle Bug on a Hardhead and some bedfish; but, I had left my confidence bedfishing stuff in the truck.

I contributed two fish on the Biffle Bug, but Billy caught the other three off of beds while I was relegated to tossing jigs in there to try and rile the fish up so Billy could catch them.  I put my bedfishing stuff in the boat that night, took some other things out of it, and was able to contribute to bedfishing in a more productive manner.  I caught a four-pounder on a River2Sea Bottom Walker 120 and then caught a 6.86 female on the River2Sea Nest Raider 190.  We finished the two-day event with 41.94 pounds, finished 19th and got a check.

Had I not figured out that I could carry all of my options with me in my truck, I may have left them at home and not been productive at all.  I would have tried to condense it all, pack it all into one tackle bag and gotten frustrated that I didn’t bring things with me.